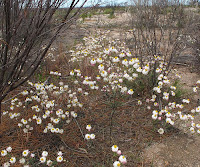 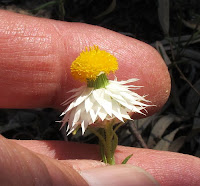 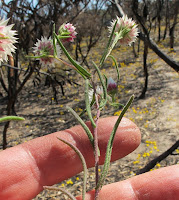 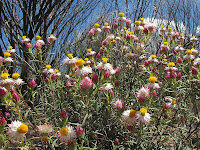 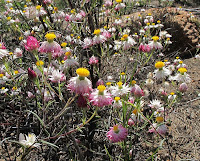 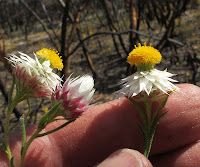 
Waitzia is a small genus in the vast Asteraceae (daisy) family and this species is an annual that proliferates after bushfires, but may not be seen for many years between fires. Maybe because of this reason and the remoteness of the area to the NE of Esperance is why Waitzia suaveolens var. suaveolens is so poorly collected and if you were to look at the FloraBase website you would think it was rare in this region. However given a suitable and recently burnt habitat it can be common and widespread.

It can be a little confusing when determining the identity of these plants, as some keys will lead to Waitzia acuminata due largely to the shape of the outer bracts (petal-like below the bundled yellow florets), which with that species are long and pointed (acuminate) and usually toothed or ciliate on the margins. However, in the official WA botanical publication Nuytsia Vol.8, No.3, 1992 by Dr. PG Wilson, he states the bracts of Waitzia suaveolens are highly variable and can also be acuminate (plus locally are ciliate), which seems to be the norm in this eastern section of their distribution. The main taxonomic difference concerning these species is the type of hairs on the upper branches and leaves, with Waitzia suaveolens being predominantly glandular, whilst Waitzia acuminata hairs are cobwebby and not glandular.

Waitzia suaveolens var. suaveolens grows to around ½ metre (2’) in height, although usually less, and in this district favours deep sandy loams, or more shallow ones overlying granite. They are recorded as flowering from September to January, but this would depend on soil moisture and air temperature, which if too dry and hot will cut short the flowering period. The color of the outer bracts can vary tremendously even at the same location, from pale pink to burgundy, whereas the inner portion (as seen from above) are usually a crisp white, but sometimes pink.