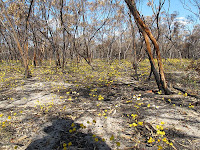 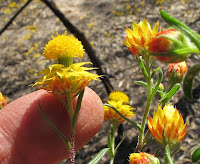 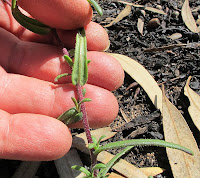 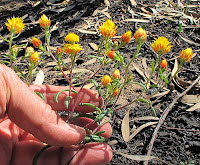 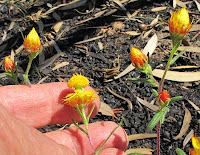 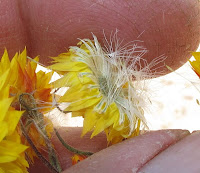 This species is the other variety of Waitzia suaveolens, of which var. suaveolens has predominantly white outer bracts, whilst this variety, var. flava are golden. Several white flowered plants (var. suaveolens) can be seen in the habitat shot above growing with the predominant golden one (var. flava).

Waitzia suaveolens var. flava also makes it appearance in great profusion after fire and in the above location covered many hectares/acres, to number in their millions. The soil was a deep fine sandy loam in flat mallee country just east of the Lake Mends playa lake, around 120 km (75 miles) NW of Esperance.

Apart from the color of the outer bracts, everything else is very similar to the information detailed in my previous post on Waitzia suaveolens var. suaveolens, which can be found under that name in the lower right-hand column.