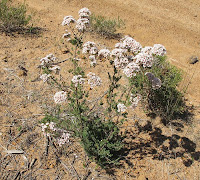 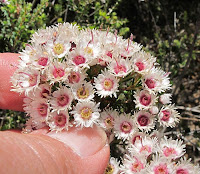 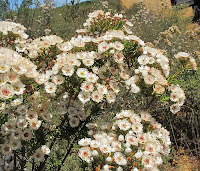 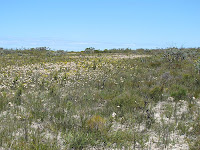 Verticordia plumosa is a widespread and highly variable species with currently eight different varieties. In the Esperance region there are three varieties, but the other two are unlikely to be confused with this species, as one is rarely encountered and the other is mainly to the west of the town, plus both have pink flowers. Verticordia plumosa var. grandiflora is the only variety with predominantly white flowers and mostly found near the coast in non-calcareous soils to the east and west of Esperance.

With this species the white flowers usually have a pale to strong pink or even a yellow centre, plus are amongst the largest of all Verticordia flowers, reaching when fully expanded to around 1 cm (3/8”) diameter. It often grows in large and numerous colonies as can be seen in one of the photos above, particularly after a bushfire when the environment is still reasonably clear of competing vegetation.

Most plants have only a few upright flowering stems, growing to over 1.2 metres (4’) in height, however they are spectacularly topped with a dense cluster of frilly edged flowers. Verticordia plumosa var. grandiflora is commonly found in low-lying areas, favouring sandy loams often over gravel or granite, where despite being reasonably well-drained, moisture is retained for extended periods. Flowering is recorded from September to December.

Posted by William Archer at 5:34 PM