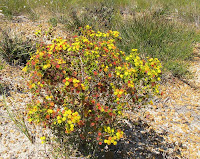 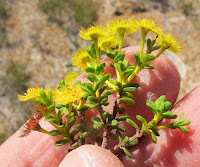 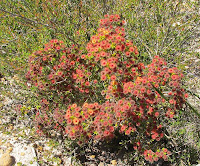 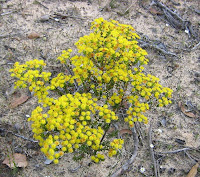 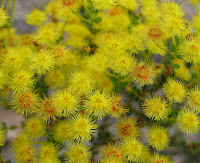 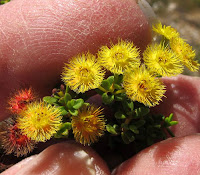 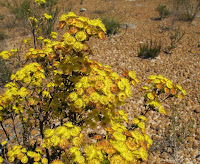 
There are two varieties of Verticordia acerosa, but var. preissii is by far the most widespread, with var. acerosa occurring only in the Perth region and overlapping with this species. Of the three yellow Feather Flowers around Esperance, Verticordia acerosa var. preissii is the easiest to identify, simply by the shape of the leaves that are shorter, broader and not round in cross-section (terete), and in this district usually elliptic or orbicular. Locally it is only found to the west of Esperance favouring sandy soils overlying gravel, which tend to be in the agricultural region and relatively near coastal, but past Ravensthorpe it occurs in more diverse habitats and also much further inland.

The flowers of Verticordia acerosa var. preissii (when compared to the other Esperance yellow flowered species), tend to be a dullish golden color, but these can turn to a glowing orange and even red as they mature, making it highly ornamental. The flowers are smaller than V. chrysantha (the most common local yellow Verticordia), but as they are generally multi-coloured and blanket the shrub, mass displays are particularly eye-catching. Verticordia chrysantha is also detailed here (see lower right-hand column).

Most Verticordias prefer open conditions with limited plant competition, enabling sizeable colonies to form and even dominate, in these conditions this species grows to around 60 cm (2’) in height, but can reach twice that size, if larger growing shrubs begin to take over. Flowering is recorded from August to November, but around Esperance with cooler coastal conditions, they commonly bloom a little later from September to December.