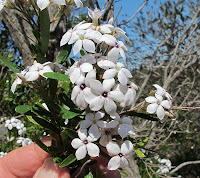 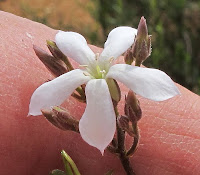 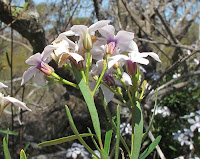 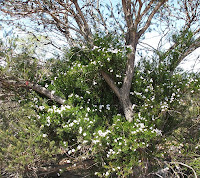 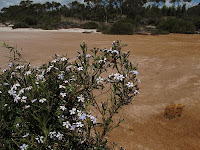 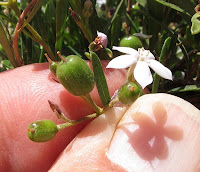 
Billardiera lehmanniana is another attractive member of the Pittosporaceae family, which has a number of interesting twining/climbing plants. When there is nothing to climb on, this species will grow into a tangled shrub of around a metre (3’-4’) in height,  but if there is, it can twine to almost twice that height. In the Esperance region this species is mainly found to the North and NW of the town, favouring sandy loams over granite, gravel, limestone and even clay.

The plant is usually not very noticeable when not in flower, but when in bloom, you cannot miss the massed display of white or pale blue flowers, thereby providing an indication of population density,  which to the west of Esperance, is reasonably widespread, but largely localised and mostly found as a handful of plants, or occasionally several times that number. Farming has obviously cut into their distribution leaving many populations as roadside remnants of past glories, however some colonies have probably been assisted by seed introduction via road construction and soil disturbance.

This species is encountered in coastal areas, but has greater distribution further inland, where rainfall tends to be less and/or irregular, which can influence flowering times. Billardiera lehmanniana has been recorded  blooming from August to December, but locally from mid-September to mid-November is usually when at its best.