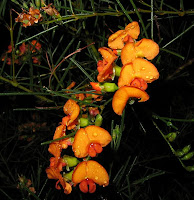 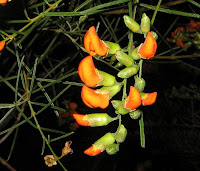 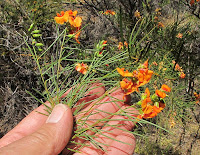 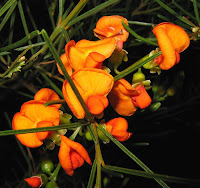 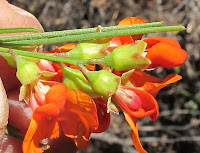 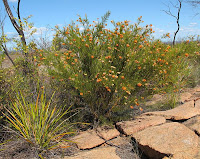 
Like other Gastrolobium species, it is highly likely that this one also produces the poison commonly known as 1080. However, very little is known about G. involutum as it is only found near three isolated rocky outcrops in the mallee region, NE of Esperance. These seldom visited granite outcrops are Mt. Buraminya, Mt. Newmont and Mt Andrew, where the plants form reasonably compact colonies in sheltered locations that are partly shaded by trees or larger shrubs and in the deeper sandy loams (over granite) around their base.


The highly spectacular bright orange flowers are produced at the tips of new growth, which means as long as Gastrolobium involutum is growing; it is also producing flowers. Consequently this species can flower continually for several months, which it normally does from June to November, providing seasonal rainfall is reasonable.

The leaves are in pairs, soft and slender, with a longitudinal grove in the top portion. Plants commonly spread 2-3 metres (8’) and tend to grow in small thickets to 2 metres (6’) in height, but can reach 3 metres (10’) when amongst taller shrubs. Being such a colourful, nicely shaped, drought hardy and long lived shrub, it is probably a matter of time before it is grown commercially for the home garden.

Gastrolobium involutum has a Priority One Conservation Status, which is for poorly known taxa “known from one or a few (generally less than 5) populations which are under threat, either due to small population size, or being on lands under immediate threat,…..” The land is not under threat, but this species is only known from three locations and even there are not widespread and relatively small populations. There is a good possibility that Gastrolobium involutum occurs elsewhere, but this is very remote country where access is difficult, so further records are not necessarily going to turn up soon.