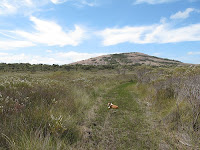 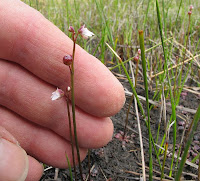 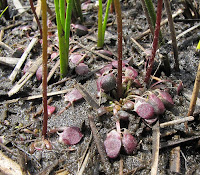 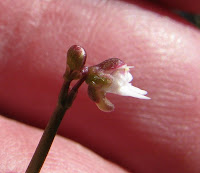 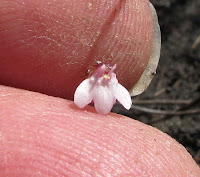 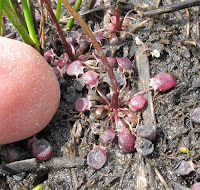 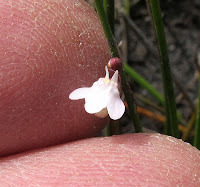 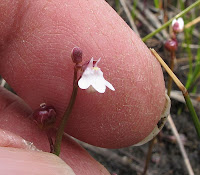 
Plants in the Utricularia genus are carnivorous by capturing via bladder-like traps, small aquatic or semi-aquatic organisms and due to this feature, are commonly known as Bladderworts. The flowers can be larger and more spectacular than this species by having a particularly large lower apron-like petal and because of this, are also called Fairies Aprons. Although Utricularia westonii has small flowers, it has large bladder type traps.

The family Lentibulariaceae has only the genus Utricularia, but not so long ago it had a second (Polypompholyx), now absorbed into Utricularia. The difference between these genera involved the number of sepals each had, with Utricularia 2 and Polypompholyx 4. I mention this as Utricularia westonii has 4 sepals, so originally had affinity with Polypompholyx.

Utricularia westonii has only been known from the Cape Le Grand National Park, but a couple of other colonies have been discovered a kilometre (less than a mile) south of the Mt Merivale summit, which is around 20 km (12.5 miles) north of Cape Le Grand. Here the main colony of several hundred individuals, is found on a slight sand/peat rise between two largely permanent swamps (surface water will dry during drought). When the first swamp fills (where Utricularia volubilis, the Twining Bladderwort occurs), it overflows into the second swamp, flooding the location of Utricularia westonii to ankle depth.

The overflow into the second swap due to seepage into the first and the sedge vegetation, can take a number of weeks to stop flowing and even then, the bladder traps are usually underwater. For this reason the bladders are not buried in the soil, but remain exposed on top and to 10 cm (4”) below the water surface. Even when they flower in normal (wet) years, they are still standing in water.

A second colony, 500 metres to the east, also occurs in a swamp but on the outer edge of a hollow that normally fills with water to a similar depth as the other colony, then overflows into a flood plain, so the water depth remains below 10 cm (4”). In this colony there are relatively few plants that are scattered around the eastern edge of the hollow.

These plants are probably more widespread in the district as this habitat is very common, with a vast number of small swamps linking to each other, the problem I think is the lack of fires to reduce the smothering sedge and other vegetation. In the habitat shot above with Mt Merivale in the background, a path is regularly slashed during autumn (when the ground is dry) to stop the vegetation from completely taking over. The Utricularia westonii plants only occur in these paths, but no doubt would also colonise the surrounding area if that were also slashed or burnt. The Mt Merivale district has many signs of pre-European aborigines and they were known to burn this type of country on a regular basis (see http://natureitems.blogspot.com/2006/12/fire-management-european-verses.html for further information).

Returning to Utricularia westonii, the bladders have three lengthy appendages and the trap door 6 long tripping bristles. The bladders themselves are to 5 mm (little under ¼”) in length, so quite large for these small plants. The plants will flower in a good (wet) season from October to December.

Posted by William Archer at 7:38 PM