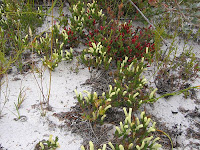 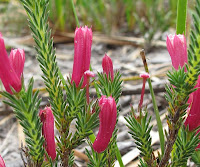 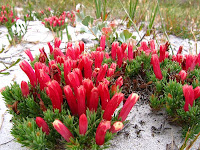 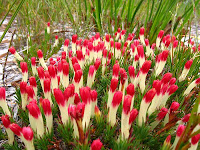 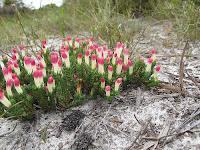 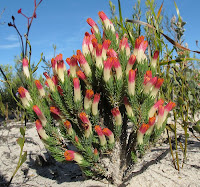 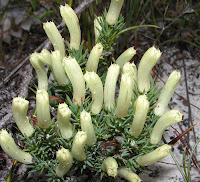 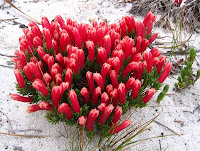 
The Lechenaultia genus is part of the Goodeniaceae family, which is made up of a large number of smallish plants with brightly coloured flowers, which in Western Australia can be weed-like by reproducing in considerable numbers after bushfires or in disturbed soil. Consequently, this family is responsible for many splashes of color that makes wildflower hunting in this State so memorable.

Lechenaultia tubiflora prefers good drainage and is commonly found in raised non-calcareous sandy soil above its highly colourful relative, Lechenaultia formosa, although the Heath Lechenaultia tends to flower later. Also like its close relative, it sports a combination of vivid flower colours (including bi-coloured varieties) that often grow next to each other.

The tubular flowers are around 2 cm (3/4”) in length and bloom for several weeks to provide when plentiful, some spectacular displays. Mostly they grow as semi-prostrate shrubs spreading to 50 cm (18”) diameter, but occasionally will grow taller to 15 cm (6”). As far as pollination is concerned, I have seen honeyeating birds probing the flowers, but insects with a long proboscis like moths and butterflies probably visit too.

The Heath Lechenaultia is common in near coastal sandplain heath either side of Esperance. It then continues west until the big timber country past Albany, where it then heads north to near Perth and the coastal region south of Geraldton. Flowering is recorded from August to January, but around Esperance (dependant on seasonal weather conditions) October to December is usually their best time.