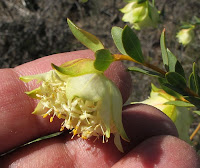 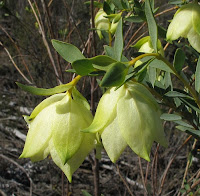 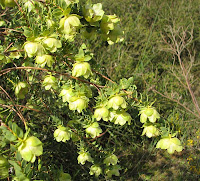 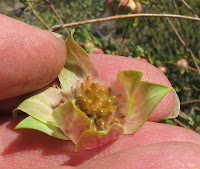 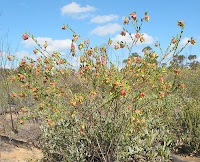 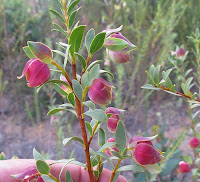 In the southern portion of Western Australia, the genus Pimelea is the only representative of the Thymelaeaceae family, but nevertheless it contains a very diverse group of attractive plants. Thecanthes the other genus in WA, is Pimelea like, but only found in the far north of the State. All species have small tubular flowers, which on their own are not overly spectacular, but are mostly clustered into heads of many flowers to make them more pleasing to the eye.

Some species like Pimelea ferruginea produce terminal clusters of bright pink flowers to create an eye-catching display, whilst others like Pimelea cracens, although with less spectacular flowers, are covered by large coloured bracts and dangle like Christmas decorations to produce a different, but equally interesting display.

Pimelea cracens is often around a metre (4’) in height, but can grow taller and did have two subspecies, but these are now obsolete and no longer apply. Pimelea cracens is a common species around Esperance, particularly to the north in the mallee district near saltlakes, where it favours a heavy loam over limestone. They are often encountered in scattered small congregations along roadsides, but can form considerable sized colonies two or so years after a bushfire, when previous larger smothering vegetation has not yet regrown.

There are a couple of similar looking species in the district that are easily confused with this one. However, when examining mature floral arrangements, the more obvious things to note regarding this species are the green/cream hairless bracts, which only loosely cover the flower clusters, plus are not strongly recurved near the tips. All three species have long silky hairs on the outside of individual flowers, plus similar looking foliage and growth habit, which taxonomically place them together.

This species is recorded flowering from July to December, but this is highly dependent on seasonal rainfall, which a little inland to the North and NE of Esperance, where Pimelea cracens is commonly found can be unreliable. However it is nearly always in bloom from August to October.

Update 3/10/10
An interesting feature of this Pimelea is the change of color of the outer bracts, once the small tubular flowers shrivel and fall, leaving only covered maturing seed. I had encountered the red coloured bracts before, but owing to the similarity of several species in the district, was not sure to whom they belonged. However from a very large colony of many hundreds, their floral bracts were progressively changing from a cream/green to a deep red, which had begun in September and should continue through October or even longer.