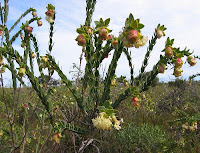 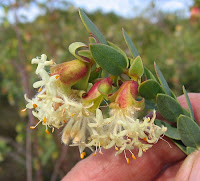 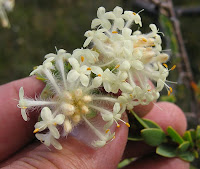 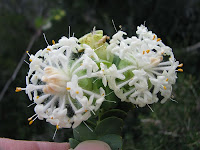 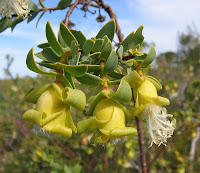 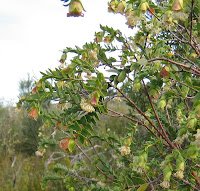 
Plants from the Pimelea genus are commonly known as Rice Flowers and are especially widespread and diverse in Western Australia. A number are quite spectacular and grown commercially like the Qualup Bell and the Pink Rice Flower, the first having large colourful bracts that largely cover the weeping flower clusters, whist the latter has colourful flowers that are erect and the bracts largely hidden.

Pimelea drummondii falls into the weeping, large bract type, which vary from cream/green to reddish. It grows to 2 metres (over 6’) in height and can form compact colonies, favouring sandy hollows and moist fine sand/laterite soils. Possibly because of its higher moisture requirement it is mainly restricted to coastal and near coastal environments, whereas the similar looking Pimelea cracens favours drier conditions further inland, although it is also found in coastal districts.

Distinguishing features of Pimelea drummondii when compared to Pimelea cracens, is the bracts that hold the flower clusters do so quite tightly and their tips are strongly recurved, giving a hat or helmet appearance. The flowers are either cream or white and have long hairs from the ovary to the sepals (in this instance the petal-like lobes), but equally distinctive are the sessile (stalkless) leaves, whereas the Pimelea cracens leaves have a small but distinctive pedicel (stalk).

Growing from Israelite Bay (east of Esperance) to Bremer Bay (west of Esperance) with odd collections around Albany it is recorded flowering from May to November, but without adverse weather conditions July to October would be more usual.