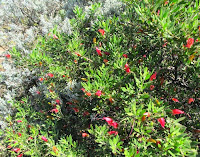 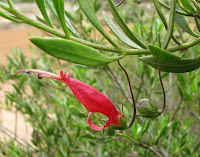 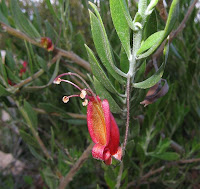 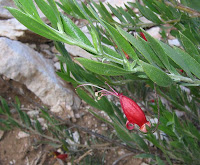 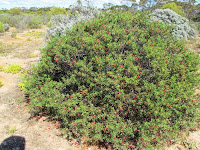 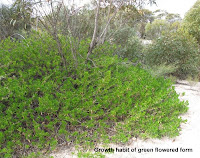 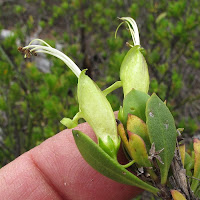 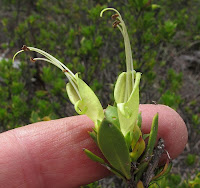 Eremophila decipiens subsp. decipiens - Slender Fuchsia
The Eremophila genus makes up the major portion of the Scrophulariaceae (Myoporaceae) family with well over 200 species and more being discovered all the time. Eremophilas tend to favour hot arid environments and consequently are more common in the sparsely populated interior and in places very few botanists travel, let alone be there to collect when plants are flowering. So probably new species will continue to be found for many decades to come.
Collectively Eremophila plants are known as Emu Bushes, probably because many produce large fleshy fruits that are keenly sought by emus, which then distribute the seeds via their droppings after they have passed through their gut.
There are two subspecies of Eremophila decipiens, but only subsp. decipiens is within the Esperance district. The other, subsp. linearifolia, differs by having very narrow foliage (subterete) of less than 2 mm in width, so is not likely to be confused where it overlaps in the central wheatbelt. The more common subsp. decipiens is very widespread from way north of Geraldton, throughout the wheatbelt and across the Nullarbor into South Australia.
Eremophila decipiens subsp. decipiens is extremely variable, to the extent that some appear to be completely different species, yet they all have the same basic structure. The similarities are tiny branched hairs on the stem (with some plants you need a x10 eyeglass to see them), plus the S shaped pedicel (flower stalk) is at least twice as long as the longest sepal (the lobes at the base of the floral tube). There are of course many other differences, but they are more obvious.
There are three forms (two above) that grow within a few kilometres of each other. The red flowered ones grow in a shallow powdery sand/clay over limestone (often near saltlakes) and form into a symmetrical shape. The green one is very lush and larger in both foliage and flower, plus spreads 2-3 times further. It grows in a drainage channel in a deep fine sand/clay loam. The other (not photographed) grows in a sand/clay loam over granite on low-lying granite outcrops and it quite upright with little lateral spread. Yet other forms elsewhere have yellow or orange flowers, often with different growth patterns and foliage variation. The point being, there are many distinctive forms even locally, so imagine the variation spread over several thousand kilometres/miles of this plants distribution.
At one stage I thought these very different forms should be separated from each other, but when you stop to think on the complexities of dozens of local variations, derived from different climate and habitat, there would literally be no end to new varieties, subspecies or even species. Some highly variable orchid genera have gone someway down this path and personally, I think it spoils the excitement of the search, when the differences between them and another species are so slight as to make identification impossible without detailed investigation, which even then may prove inconclusive.
Whatever the problems taxonomically with this Eremophila species, it is still a most attractive and hardy species, plus also bird-attracting (to pollinate the flowers). This species like many that grow in semi-arid to arid conditions tend to be very opportunistic regarding rainfall that can influence the flowering period drastically, consequently they have been recorded flowering from February to December, but locally July to November would be more usual.

Posted by William Archer at 6:59 PM