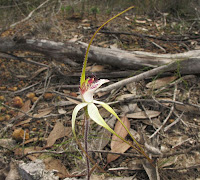 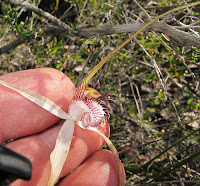 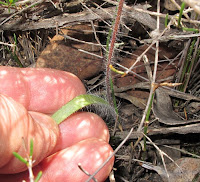 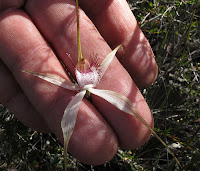 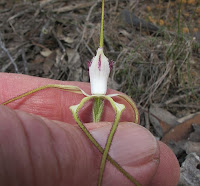 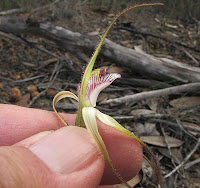 
This spider orchid is known mainly from granite outcrops to the north of Esperance, but with photographs alone it is very difficult to distinguish from other Caladenia longicauda subspecies. However the smaller size (11 cm or 4.25” across) and location is what gives it away. When first sighted it appeared to be a large form of Caladenia vulgata the Common Spider Orchid of which one was growing nearby, but the red fringe on the labellum immediately highlighted the difference.

Another similar looking orchid Caladenia cruscula also occurs in the area (Kau Rock to the Mt Ney region), but is smaller again (5 cm or 2” across) and only known from sandy rises around saltlakes. Two Caladenia longicauda subsp. rigidula plants were observed 65 km (40 miles) NE of Esperance, one under shrubs in a sandy loam over granite and the other, several hundred metres away under low mallee eucalypts in a sandy loam over gravel (in turn over granite).

The height of these orchids also separated them from other Caladenia longicauda subspecies, which were around 15 cm or 6” as compared to more than twice that height with other local (more coastal) subspecies. Also the sepals are held more stiffly, being less pendulous than other subspecies. It apparently flowers from August to early October.

It will probably be gathered from the photos above, the orchid with the straight labellum is still developing, whilst the mature plant has the recurved labellum. 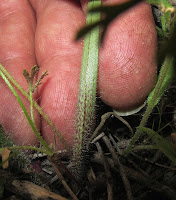 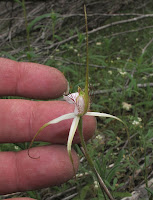 Update Feb 2011
Two photographs added that were taken in October at Mt. Heywood, which is 20 km further north from where the others were taken and sited in the mallee region.