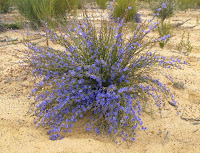 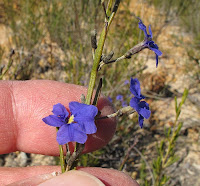 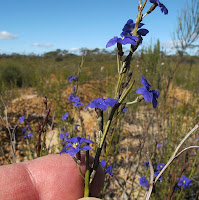 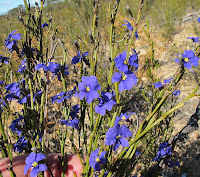 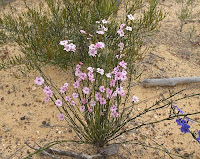 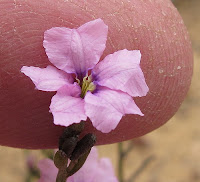 Dampiera is a common and widespread genus with its highest concentration in the higher rainfall areas of Western Australia. They are mostly small herbs or sub-shrubs and like many in the family Goodeniaceae, do best after bushfires and in disturbed soils. Consequently they are commonly found along roadsides, whereas in neighbouring mature (unburnt) bush only a few plants may survive in open areas between taller vegetation.

A common misconception of any blue flowered plant from this group is, it must be a Dampiera, but this is generally not the case as many others and often hardier species in Goodeniaceae are more plentiful. The easiest way to determine a Dampiera, is to open out the flower and check the sides of the two corolla lobes (petal-like) that are often together to form a keel like structure below the three other lobes. Along the inner lower edges, there will be pocket called a auricle, which looks like the pocket formed by an extra skin flap on the outer lower edge of a dog’s ear. This pocket is a highly distinctive feature of plants in the Dampiera genus.

Dampiera sacculata has upright stems that arch over as they develop, particularly with the weight of flowers that form over much of its length. The deep blue flowers have a yellow centre, however it is the small pouch formed by the bulging ovary at the flower base that is distinctive and what gives this plant its name. This floral pouch in the gibbous ovary (quite separate from the auricles) is formed from a single (growing) seed, which is curved back upon itself (end to end) and contained in the ovary by the pouch.

The Pouched Dampiera grows to ½ metre (1’6”) in height and occurs from Israelite Bay (east of Esperance) to the Albany district (west of Esperance), then north but within the wheat growing region to the NW of Perth. Flowering is recorded from May to November, but this would depend on local weather conditions, particularly rainfall. Many Goodeniaceae, especially herbaceous species are fast growing and very opportunistic by quickly coming to bloom after any reasonable rainfall.


Update 12/09/10
Photographs of an interesting pink form included. It was the only plant of this color amongst many hundreds of blue ones.