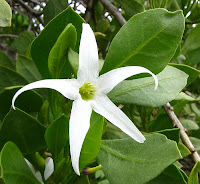 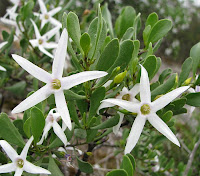 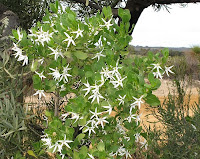 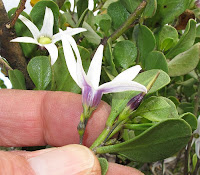 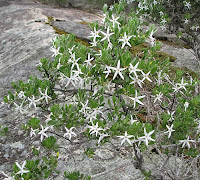 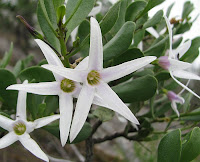 
The Anthocercis genus belongs to the large and highly diverse Solanaceae family, which includes important food plants like Potatoes, Tomatoes, Chilli, etc. Other members are highly toxic like the Deadly Nightshade, whilst others have narcotic properties like tobacco, Pituri, etc. And of course some are just pretty to look at, but they all produce an array of alkaloids that can cause various reactions to those who use them.

Anthocercis although thought to be toxic to stock is more of a pretty to look at member, with large (5 cm or 2” diameter) white/cream, gently aromatic flowers and broad non-prickly, light green slightly viscid (sticky) foliage. It mainly occurs to the north and east of Esperance on elevated granite outcrops (not often found on low-level ones), where drainage is good although kept moist during cooler months. As there is only a limited amount of soil on these exposed granite outcrops, their roots must penetrate deeply into small rock fissures that are the last to dry as summer approaches. The advantage of such a harsh environment means competition from other vegetation is greatly restricted and this species is invariably the largest shrub surviving in habitat.

There are two subspecies of Anthocercis viscosa, with subsp. caudata the only one in the Esperance region, whilst the other subsp. viscosa, is mainly found around Albany. In both cases they tend to occur in coastal or near coastal areas, probably due to the higher rainfall (the Albany subspecies has shorter, but broader petals).

If the local species grows near other vegetation it can be upright and spindly to over 3 metres (10’) in height, but mostly in more open situations it seldom exceeds half that size and is quite bushy. It is recorded flowering from August to February, but this is very dependent on rainfall, as these plants will quickly resurrect themselves with new growth after summer storms. August to November would otherwise be their main flowering period.

Posted by William Archer at 3:32 PM