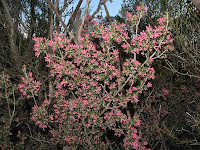 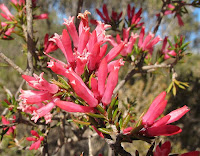 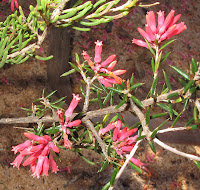 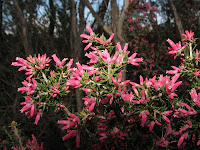 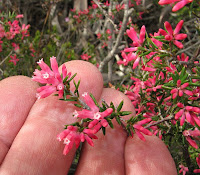 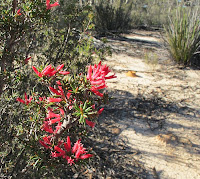 The heath Lissanthe genus was until 2003 thought to only occur in the Eastern States, but after the genus revision by Darren Crayn, Elizabeth Brown and Jocelyn Powell, several species were discovered in Western Australia. Lissanthe rubicunda was originally known as Leucopogon rubicunda, although looking very much like an Astroloma.

Lissanthe rubicunda was reclassified from Leucopogon because it had a small feature that typifies Lissanthe. This was a small flower stalk (pedicel), where the bracteoles (tiny pair of bracts) are separated from the calyx (outer base of the flower) by a stalk (pedicel). With Leucopogon species, the bracteoles are directly under the calyx. Lissanthe also have hairy styles, plus longitudinal groves on the underside of the leaves (these look like recurved edges).

Growing to metre (3’) in height, this species is common and widespread particularly in the mallee region to the north of Esperance, where the soil is a fine sand/clay over limestone. It is usually found under eucalypts in semi-shade, where it can persist for a number of years. It has prickly leaves, but is a prolific bloomer with many flowers from June to September and dependent on seasonal rainfall can produce additional blossom outside of this period.