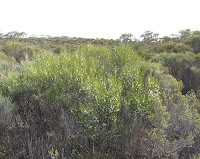 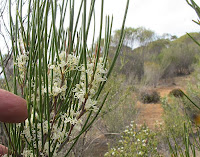 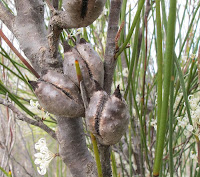 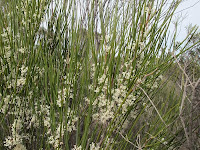 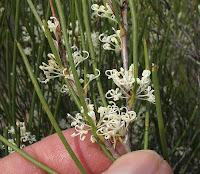 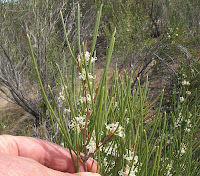 
This Hakea is the 22nd species I have posted for the Esperance region and have at least another three to go, which indicates the impressive diversity of these plants in the district. This species is a relatively late one to be described, having only been published in 1990 by Dr RM Barker of the Adelaide Herbarium.

Hakea bicornata has a limited distribution, being mostly recorded within a 100 km (62 mile) radius to the north, northeast and east of Esperance. Although quite common where found on sand/clay soil over low granite outcrops, it is easily overlooked when not in flower, as the long slender upright foliage looks very similar to the common and widespread Calothamnus gracilis.

The woody fruits are about the size of a man’s thumbnail and the species name of bicornata refers to the two conspicuous black horns atop them, which despite their evil appearance are quite fragile with the tips often breaking away. The flowers are a pale cream and relatively small compared to most other local hakeas. However they are quite numerous and emit a mild honey fragrance to attract pollinating insects.

Growing to around 1.5 metres (5’) in height, Hakea bicornata is an openly structured shrub and has been recorded flowering from April to August, although June/July would be its main period.