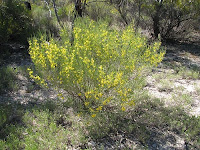 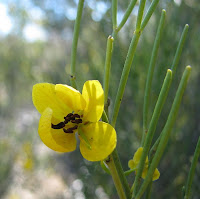 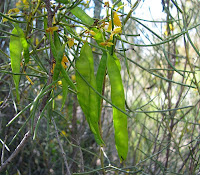 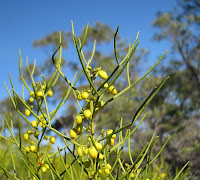 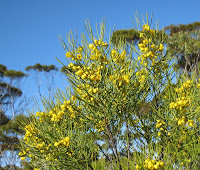 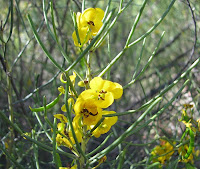 Senna artemisioides subsp. filifolia – Desert Cassia
The Senna genus has recently been moved to the Fabaceae family, earlier having been placed in Leguminosae or Caesalpiniaceae. Previously the genus was also known as Cassia, a genus that is no longer regarded as occurring naturally in Australia. The species name has also changed from Cassia nemophila and Cassia eremophila to Senna artemisioides. If that were not enough, Senna artemisioides subsp. filifolia is also known as Punty Bush or Fine-leaf Desert Cassia. So as you will appreciate this group of plants can be tricky to identify, as combinations of the above are listed in various botanical literature.
Thankfully, this species with its fine 1 to 4 paired leaflets (mostly a single pair locally) is easy to identify in the Esperance region, where it is quite widespread and largely confined to mallee country (with a limestone substrate) in the north and northeast. However, it also occurs in inland regions of all the mainland States and in WA is not much different, avoiding the cooler/wetter southwest and the west coast, although being common further inland. It is highly probable that this species is spread even further afield by vehicle traffic, as it is a colonising species after bushfires and disturbed soils along roadsides.
Despite its inland preference, it seeks moisture by growing in (non-flooding) moist hollows and around rocky outcrops (usually with a limestone topping); it is also found in flat sandy regions. Amongst tall mallee vegetation it can grow to 3 metres (10’), but in most instances is around half that height. The yellow buttercup-like flowers are about 1 cm (nearly 1/2”) diameter and quite prolific, with new ones developing as the plant grows. However, being so widespread, plants are subject to a considerable range of climatic conditions and varying rainfall, therefore will bloom depending on local conditions, which tend to be after rainfall at the cooler time of the year, so unless it is hot and dry, flowers can invariably be found. Locally, August to October would be the best flowering period.
The pods are initially green and form in considerable quantity, but as they mature turn to a grey/brown that burst open when sufficiently dry to scatter the seed. The flowers are pollinated by various insects and are also visited by butterflies and small birds.