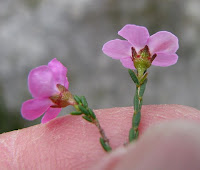 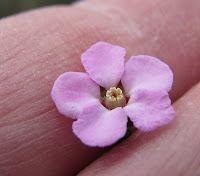 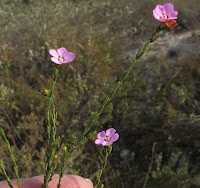 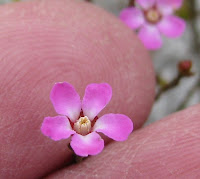 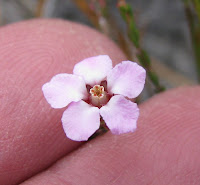 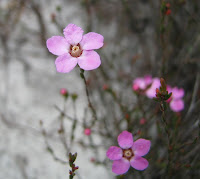 Myrtaceae is that very large plant family containing everything from Eucalyptus to Callistemon. Rinzia another member is a reinstated Western Australian genus with 12 described and 1 undescribed species, it was twenty odd years ago placed into Rinzia from the Baeckea genus, yet despite this time lapse is still poorly known to the general public.

The features that place them in their own genus largely relate to the stamen configuration; they are unusual as their filaments are broad and flat, plus attached to each other for at least half their length. When viewed in the flower, they appear slightly curved at the top due to the anthers and a lack of support; the width of the anthers are usually less or similar to the width of the filament. There are mostly 10 stamens, but can be 12 in some flowers, with half being longer and alternating with the smaller ones.

Rinzia dimorphandra is the only Rinzia species in the Esperance region and mainly found in non-calcareous low sandy heath (sometimes over gravel) a little to the north, but mostly to the east of Esperance to the Cape Arid region. My most westerly sighting and exceeding WA Herbarium collections is 120 km (75 miles) from Esperance off West Point Road, but is probably more widespread than records would indicate. It needs regular bushfires to reduce competing vegetation, otherwise is quickly smothered, so they are usually only around for a few years before disappearing to await another fire.

This Rinzia is mostly around 30 cm in height, with a sparse twiggy structure and small leaves that are appressed to the stem making it virtually invisible to spot when not in flower. However when it does bloom, the flowers (to 1 cm or 3/8” diameter) are a delightful pale, to deep pink that demand your attention. Flowering is recorded for October, but can be found at other times too, one record I have is for June, so you never know your luck as they are worth seeing.

Posted by William Archer at 7:55 PM