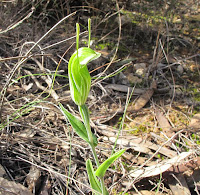 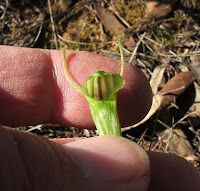 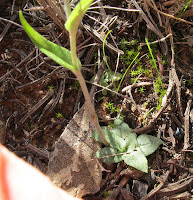 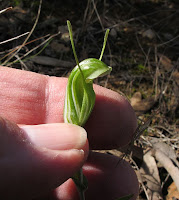 There are two things immediately noticeable about this orchid, the first is the flower size (excluding the thin upright lateral sepals), which is around 2 cm (3/4”) and the lack of a leaf rosette around the stem. Sometimes the basal rosette is absent all together, but if present is always to one side of the stem.

The above orchid was found around 45 km (30 miles) NNE of Esperance and SW of Mt Ridley making it further inland than other local collections, which are sketchily recorded from Munglinup to Cape Arid (near coastal and around 100 km or 62 km) east and west of Esperance. However, after a large gap to the north of Albany, it extends from there to the south of Geraldton, including several inland mallee regions.

In the Esperance mallee region, the above were part of a small colony growing under a metre (3’) high Baeckea species, in a fine brown loam over limestone. Flowering is recorded from May to August, although locally, later than May is more likely.

Posted by William Archer at 2:20 PM