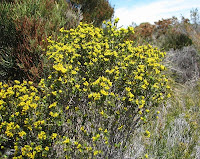 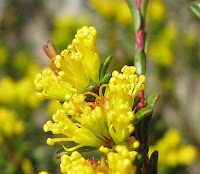 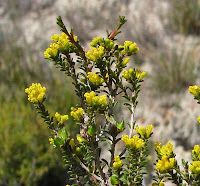 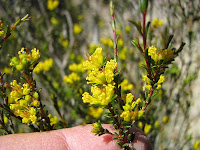 
Stachystemon polyandrus is a moderately bushy shrub to 90 cm (3’) in height (mostly shorter), with several clusters of yellow male flowers and one or two individual female ones. The female flower can be identified by the single pair of stigmatic lobes (poking above the male flowers), a feature that places this plant into the Stachystemon genus.

In the 2003 revision of this genus by Halford and Henderson, they give the distribution of this species from ‘near Kulin southwards to Fitzgerald River National Park and to Israelite Bay…’ However the WA Herbarium only lists it to the near north and west of Esperance, which also agrees with my findings, so likely the Herbarium do not have any easterly specimens. But whatever the situation, it is certainly more plentiful to the west of Esperance.

These Stachystemon species appear to have at least a partial dependency on bushfire or soil disturbance, as they are nearly always encountered within a few years of such an event, usually in small reasonably compact colonies. This species favours non-calcareous sand over gravel soils and can be found in roadside gravel pits, although you need to walk around as being small leaved and somewhat nondescript, they tend to blend into other vegetation and go unnoticed.

The small female flowers when fertilised will produce a larger conical seed capsule that can be seen in one of the photographs. Like many Euphorbiaceae they will bloom over a considerable period, particularly if weather conditions are not extreme. Stachystemon polyandrus mostly flowers from September to January, but has been recorded at other times too.