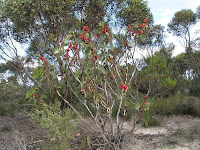 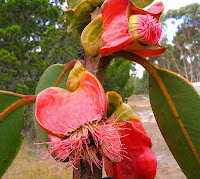 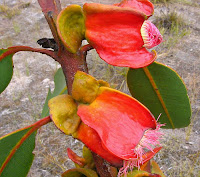 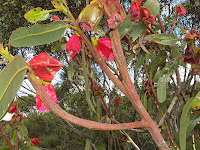 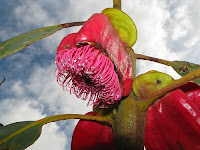 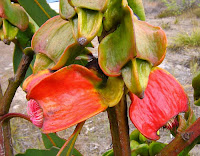 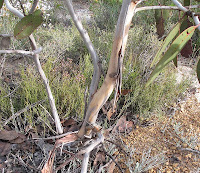 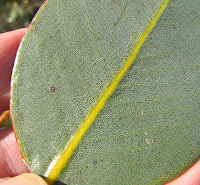 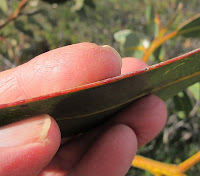 Eucalyptus tetraptera - Four-winged Mallee
Eucalyptus tetraptera is also known as the Square-fruited Mallee due to the large (5 cm or 2” square) fruits. The mallee reference refers to the habit of the plant ie, it has an underground lignotuber, which will regenerate after a bushfire usually resulting in multiple trunks, although if not burnt or damaged a single trunk can persist.
The other use of the word Mallee is for the inland district that has a large number of Eucalyptus species, many of which have this mallee type growth habit. This district is typified by the fine sand/clay soil over limestone and has a very distinctive flora that does not include this eucalypt. Eucalyptus tetraptera prefers a sandy loam particularly over a heavier one like gravel, a soil substrate that has largely been taken over for broad-acre wheat farming, so although still a common plant along roadsides and reserves, its numbers have no doubt been greatly reduced since pre-European times.
The flowers although of a reasonable size are totally eclipsed by the bright square pink/red seed capsules (fruits), which remain showy for most of the year, only darkening to a grey/brown with age. Probably the striking fruits are to attract the attention of pollinating honeyeating birds, and must compete against a plethora of flowers in the shrubby heath where Eucalyptus tetraptera normally occurs.
Growing to 3 metres (10’) in height, it ranges from coastal non-calcareous soils to the Mallee further inland, and from Israelite Bay (east of Esperance) to the Stirling Range near Albany. The Four-winged Mallee can bloom from June to December, but the fruits and the thick chunky leaves are far more eye-catching.