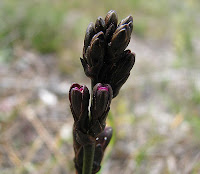 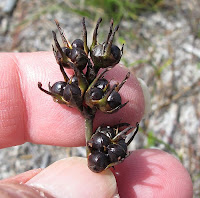 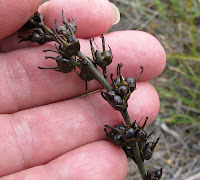 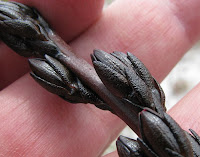 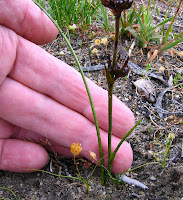 
Haemodorum brevisepalum is in the Haemodoraceae family, the same as Kangaroo Paws (Anigozanthos), Conostylis and others, but bears little resemblance to them. The flowers plus most other parts, are very darkly coloured with no colourful display as normally expected from this family, the exception being the bulb type root that is orange/red when sliced and used by aborigines as a spicy food source. The one excavated above was collected for the WA Herbarium.

Purely going on photographs of this species and Haemodorum spicatum (previously posted, see species list in right-hand column), both look very similar, but in the field are easily separated by their height difference. H. spicatum is commonly over a metre (3’) in height, whereas the Short Sepal Bloodroot seldom exceeds 30 cm (12”). The other difference is in the length of the outer perianth segments (sepals) that are much shorter with H. brevisepalum (half the length of the inner perianth ‘petals’). With H. spicatum, the mature sepals and petals are much the same length.

An explanation of the floral structure will help understand the transformation detail in the above photographs. Taking the top two photos, it will be noticed that the flowers are in pairs and when fruiting, the triple seed capsules represent a single flower. The pink coloration at the flower summit are the tops of broad anthers and are not an inner petal, the outer black/brown portion is the petal, but the anther is supported by a thick filament that is attached to the inner base of the petal. The smaller looking petals further down and between the long petals are actually the sepals.

The distinctions between the above features are now more clearly seen in the top right picture, showing the seed capsules and dried floral parts. The anthers are clearly seen atop the three taller spike-like projections and if you look closely, the filament below the anther is actually wrapped in the dried shrivelled petal. The sepals as they matured have increased in width and are the broad bract-like components with a spiked apex, which  are formed by greater shrinkage at the unattached sepal top as it dried.

Although poorly collected, Haemodorum brevisepalum is actually common (if not localised) in moist heath to the east of Esperance. This is because it mainly shows itself the following spring/summer after a bushfire, when it can occur in colonies of 10 or more plants per square metre/yard and spread over several hundred square metres/yards. During the hotter summer months they die back to ground level, but the seed from this post fire period will germinate after autumn rains, but do not flower. The following spring/summer a small portion of the mature plants (no young ones) will flower, with something like a single plant to 10 square metres/yards or even fewer. In following years their flowering numbers will decrease even further once surrounding vegetation develops to crowd them out, also I have not seen any leaves of non-flowering plants despite hands and knees searches over known sites.

This species prefers a heavier loam than the larger Haemodorum spicatum, which is commonly found in deep sandy soil. Locally Haemodorum brevisepalum is found on near coastal flood plains in a sandy/peat soil over clay that is approximately 30-45 cm (12”-18”) below the surface. Also in a sand/clay loam of similar soil depth over granite, or gravel at the base of granite outcrops. Both habitats would provide moist, but slow draining conditions (akin to deep level seepage). Flowering is recorded from September to December, but the fruiting plant can be found until March, when the now dead and dried (above ground) vegetation will start breaking down.

Posted by William Archer at 6:09 PM