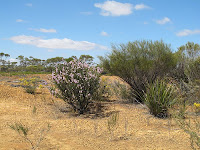 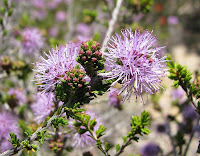 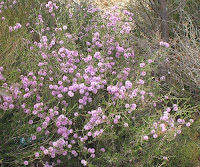 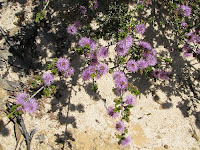 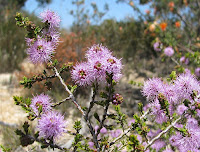 The genus Beaufortia is a member of the large Myrtaceae family and can resemble plants of the Melaleuca genus, but are quickly separated by the shape of the anthers. Melaleucas have their anthers attached to the filament at their middle (versatile) and open by long longitudinal slits; the anthers of Beaufortia are attached at their base and have two shorter horizontal slits. Melaleucas also have several ovules (unfertilised seeds) in each ovary cell, whilst Beaufortia have only one.

Melaleuca is a very large genus, with hundreds of species distributed Australia wide, Beaufortia on the other hand has around 20 species that are endemic to Western Australia. Most are highly ornamental with bright sometimes multi-coloured bottlebrush-like flowers and neat decussate foliage (leaves opposite, with the next pair also opposite, but set at right angles). Not all, but most Melaleuca species favour low-lying areas that are often inundated during the wet season, whereas Beaufortia generally prefer better-drained sites.

Beaufortia schaueri is a shrub to a little over a metre (4’), but usually shorter with a spreading habit. It prefers the heavier loams, often with gravel or over limestone and although occurring along the coast in certain regions, locally it is more likely found inland towards the mallee zone, where it can be quite common. Its normal range is from Israelite Bay (180 km or 110 miles east of Esperance) to the Albany district (380 km or 240 miles west of Esperance).

The Pink Bottlebrush is easily recognised by the tightly overlapping clusters of leaves and the pink/mauve globular flowers, which bloom from June to January, although these times are dependant on seasonal winter/spring rainfall. The most reliable period inland from Esperance is September to December.