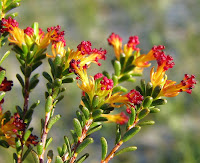 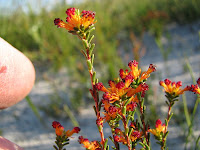 Stachystemon is a member of the highly diverse Euphorbiaceae family and is distinguished from other genera by the perianth (calyx-like) around individual flowers and the two lobed stigma of female flowers. Both Stachystemon brachyphyllus and S. polyandrus are recorded for the east of Esperance where the above colony was discovered in the second year after a bushfire. However it is not clear if these particular plants are a hybrid between the two, or a transition form as one species evolves to the other, as both appear closely related. I include it here as it is of scientific interest, plus also a pretty little shrub.

Stachystemon brachyphyllus is more of an inland species and recorded from the NE of Esperance at Mt. Heywood and Mt. Ragged (50-60 km or around 35 miles from the south coast) in the mallee region. Stachystemon polyandrus is more of a coastal species basically occurring in non-calcareous heathland. This intermediate form was 30 km from the south coast, growing on a north facing sandy slope (probably over gravel, a heavier soil or even granite) and draining to a substantial clay base flooded area. The colony consisted of over 100 plants in about ½ hectare (100 metres x 50 metres).

Stachystemon polyandrus has already been posted here (see right-hand column) and has yellow to white flowers, with male flowers having between 10-14 stamens. Stachystemon brachyphyllus has a reddish flower with around 25 stamens. There are other small differences, but the colour and stamen number are the most obvious. This intermediate form has the reddish flowers of S. brachyphyllus, but the stamen number of S. polyandrus, plus differs in other respects.

In the 2003 paper of David A Halford and Rodney J.F. Henderson of the Queensland Herbarium, titled A revision of Pseudanthus and Stachystemon, from the Studies in Euphorbiaceae series, they do mention intermediate forms between these species, so presumably other colonies also exist. Plants in this colony were all young and not fully grown, so their ultimate height and development could not be obtained, but at this stage were around 30 cm (12”) in height. They were photographed in mid October, so would likely flower between September and December as do S. brachyphyllus and S. polyandrus, with unseasonable weather extending or shortening this period.