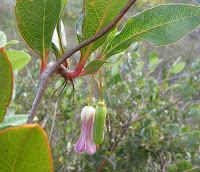 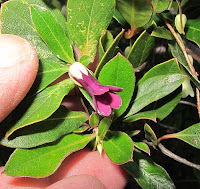 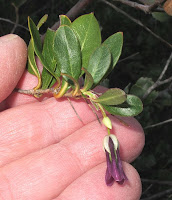 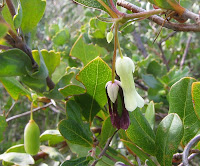 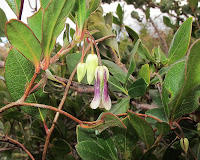 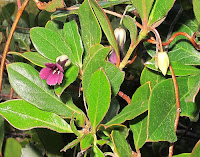 
The Pittosporaceae family has quite a range of shrubs plus the odd tree, but is noted for the number of climbers and twiners, many with impressive floral displays and most occurring in Western Australia. In Billardiera there are 10 WA species and all are either climbers or twining shrubs, they range from the Nullarbor to near Geraldton on the west coast, but are particularly widespread around coastal regions and the Wheatbelt.

Billardiera coriacea will climb on shrubs to 1.5 metres (5’), but is easily overlooked despite having broad foliage and bright flowers. It blends well into its supporting shrub, seldom exceeding its foliage, but filling gaps between  stems and generally bridging holes. It is not that it is well camouflaged, but you need to look directly at the shrub to spot it, which may be one in hundreds. Billardiera coriacea is sparsely recorded from near Israelite Bay (east of Esperance) to Walpole (west of Albany), then north (mainly through the inland Wheatbelt) to near Geraldton (north of Perth). However it is probably more common than collections would indicate, but overlooked.

The flowers of Billardiera coriacea are up to 2 cm (3/4”) in length and are initially cream with the petals forming a tube, but as it matures it changes to pink, then to purple, plus the petals separate to reveal the developing berry fruit. Locally it occurs in deep non-calcareous sand, but can also be found over gravel or clay, providing the drainage is good. It is not overly common, but is quite widespread, the seed probably spread by birds.

It is recorded flowering from May to November, but if conditions are not too harsh and it has access to moisture or shade, will also bloom during summer.