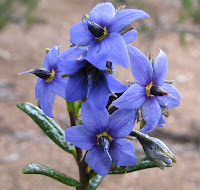 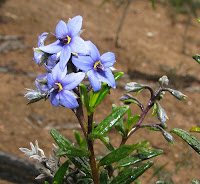 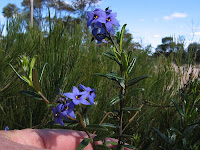 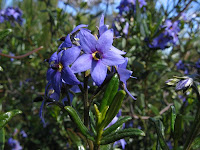 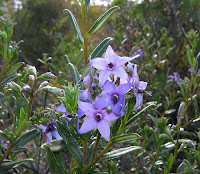 Halgania andromedifolia is a reasonably common and widespread shrub, particularly of the mallee region that typically has a fine sand/clay topsoil over limestone, although it can also be found on gravel and over granite, although the latter usually has a limestone overlay. It does very well after bushfires that reduces competition from other plants, especially overhead eucalypts that dominate available moisture and sunlight in a low rainfall district.

Shrubs in the Halgania genus are generally known as Blue Bushes as most have deep blue flowers, although purple, pale blue and even white forms are not unknown. The 1.5 cm (½”) diameter flowers of Halgania andromedifolia are almost a royal blue and as they grow in terminal clusters can be very showy. The leaves are a shiny bright green and quite viscid (sticky), which provides a gloss.

There are 14 West Australian Halgania species, with 4 being recorded for the Esperance region, most occur inland and only one is commonly found near the coast. It is interesting to note that hardly any collections have been made SW of a line drawn between Albany and Perth, where conditions during winter are colder/wetter and although containing coastal heath, is otherwise heavily forested.

Halgania andromedifolia grows mostly from ½ to 1 metre in height, slightly wider than high and usually bushy from the ground up. Flowers are recorded from August to January, but this would depend on seasonal rainfall, which can be quite variable in these drier areas. Flying insects (due to the sticky foliage), I imagine would be the main pollinators.