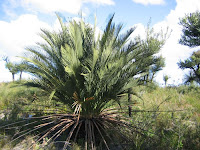 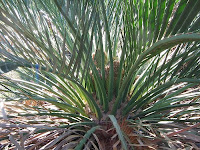 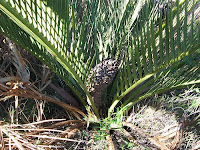 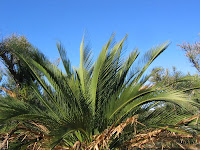 
Most would know what a Cycad was, probably coupled with images of Dinosaurs munching on them as are commonly drawn to illustrate an ancient world. Although the large dinosaurs have long gone, cycads are still doing very well and are distributed over much of the warmer parts of the globe. The genus Macrozamia is one of several in the family Zamiaceae, and from which the common name of Zamia Palm originates. In Western Australia we have 3 Macrozamia species, but only Macrozamia dyeri is found in the Esperance district, the other two are along the west coast in the Perth region.

Macrozamia dyeri is recorded as mainly growing in deep white calcareous sand, but this seems to be something that has been passed down scientific literature from early times, as from my experience this is not a preferred habitat although they can sometimes be found there. They are also found on deep non-calcareous sand, but favour sand over granite and are often very common around low-lying outcrops, plus the deeper soils on larger mounts. Most of the white sand in the Esperance region (can extend right down to the beach) is actually acid, having been leached of alkaline material in bygone days when rainfall was much higher and large floodplains drained into the sea. The alkaline zone (when it does exist), is usually within 3 km of the sea, so is not overly plentiful and has only a limited number of species when compared with other habitat zones. Even when there is limestone, it does not mean the topsoil is calcareous as this too may have either been leached of alkaline materials, or eroded away and been replaced by non-calcareous windblown sand.

The palm-like Macrozamia dyeri, develops a trunk from the accumulation of leaf bases in a similar way grasstrees do (Xanthorrhoea spp.) and is consequently very slow growing. As the trunks can grow to 3 metres (10’) in height (mostly less than half that size), some plants are obviously hundreds of years old. They are nevertheless impressive plants with arching fronds in excess of 2 metres (7’) to provide a wide canopy. Fire is required for the plants to flower and the trunks are usually black because of it, but like grasstrees, they suffer no ill effect regardless of how often they are burnt.

There are male and female plants whose flowers are wind pollinated (those shown above are male, the female ones are similar but more chunky), the seeds when produced are the size of a large raw date and occur in considerable quantity. The seed is surrounded by a thin shell containing a nut-like interior and is obviously an excellent food source, but these ancient plants have developed defences against being eaten and are highly poisonous as early explorers and settlers quickly discovered, when they doubled up in pain after eating them, some even dying. However aborigines over thousands of years of occupation discovered ways to neutralise them by roasting, leaching and aging, etc (don’t try this at home), so to them it became an important food source. With their fire-stick land management, it is quite likely they farmed these plants by burning regularly to encourage flowering.

Macrozamia dyeri is a near coastal species and does not extend into the inland mallee region (approximately 50 km or 30 miles from the coast), probably because of non-sandy soils, as heat and prolonged dry periods do not trouble these plants. They range from near Cape Arid (110 km or 70 miles east of Esperance) to the Salvation Boat Harbour region, a similar distance to the west of Esperance. As they rarely flower without the influence of bushfires, they will usually do so in the spring of the fire year, or the following year.

Posted by William Archer at 7:17 PM