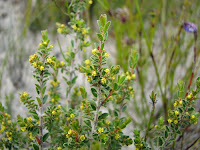 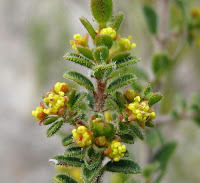 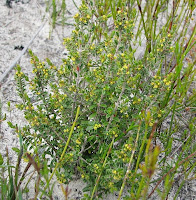 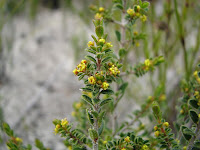 When I was a young man, a botanist friend said that if I were ever having trouble keying out a plant and could not make sense of the structure, then it would probably belong to the Euphorbiaceae family. Having tested it many times. I fully agree. Stachystemon is one of a number of interesting if not taxing Australian euphorbia genera, with the eye-catching white flowered Wedding Bush Ricinocarpos spp., being among the better known.

To give some idea of the variability of plants within this family; shrubs like the Wedding Bush have large attractive petals, whereas some euphorbias have none at all, some even lack sepals, leaving the sexual organs completely exposed, these too can differ in size from minute to quite large - It has just occurred to me that I may be writing flower porn here, amazing the similarity! Anyway to continue, the stamens per flower can number from one to over twenty. Some female flowers can by the tips of their style lobes, just be seen surrounded by males, whilst female flowers of other Euphorbiaceae, project themselves away from the males on a long stem and look more like a ripening fruit. The euphorbia fruits themselves can vary from a berry, a drupe (peach-like) to a dry capsule. Other major differences exist within this complex family, but the above will I trust provide a glimpse into this botanical labyrinth.

Stachystemon virgatus is a pretty shrub with bright yellow flowers and growing to less than ½ metre (1’6”) in height. It occurs from the Cape Arid region (east of Esperance) to the west of Albany, plus the west coast Busselton district, then again in the Darling Range behind Perth, so is quite widespread. Apparently this species grows in a variety of soils and habitats, but around Esperance I have only seen it in sandy heath, possibly overlying gravel.

Euphorbias rely on the wind and/or insects for pollination and probably for this reason need reasonably open conditions that are naturally created by bushfires, conditions that agree with local sightings of Stachystemon species. Flowering is recorded from September to November, but to find them, you need to be in the right place at the right time, as they are likely to be quickly overgrown by taller vegetation.

Posted by William Archer at 4:40 PM