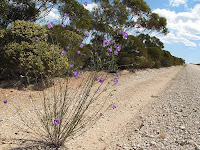 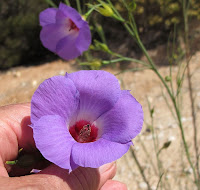 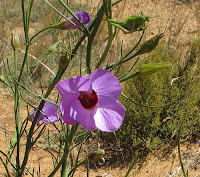 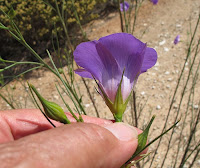 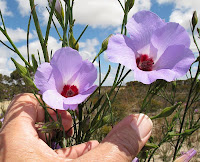 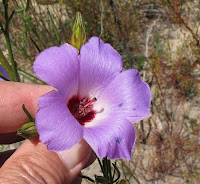 Alyogyne hakeifolia is a member of the family Malvaceae and was originally placed in the genus Cienfugosia because the tip of the style (central upright part of the flower, surrounded by stamens) was undivided. Other current members of Alyogyne (a resurrected genus) were initially placed in the Hibiscus genus, because the style tips were divided into 5 segments. However now, the numerous Australian Hibiscus species are restricted to the northern tropics and interior, and well beyond the Esperance region.

Although Alyogyne hakeifolia can be found in near coastal districts around Esperance, its real stronghold is the mallee region and further inland, where it ranges from the Nullarbor to Kalbarri (over 1200 km or 750 miles apart) and extending 400 km (250 miles) from the coast. Interestingly, it does not occur in the higher rainfall SW corner of the State.

Also known as the Red-centred Hibiscus in horticultural circles, it is grown as a garden plant with many forms and apparently does not like humid conditions, which will quickly cause its demise. This adverse reaction to humid weather is probably the reason for its drier WA distribution. Alyogyne hakeifolia is very adaptable to soil type, happily growing in sand or gravelly clay, over granite or limestone and often in drained low-lying areas. Nevertheless its preferred habitat is the aftermath of bushfires, when it can rapidly grow to 3 metres (10’) in thickets of many thousands to cover several hectares (thousands of sq. yards). In these conditions they can grow to 2 metres (over 6’) in the first year, 3 metres in the second, then rapidly die off in the third, to be completely gone by the forth. They do however leave volumes of seed in the soil, preparation for the next passing bushfire.

The 5 cm (2’) diameter flowers are edible, providing you don’t mind consuming an odd little insect also making a meal of it. They bloom prolifically locally with new flowers forming continually from September to December, but can also flower at other times and other places, depending on growing conditions and seasonal rainfall.