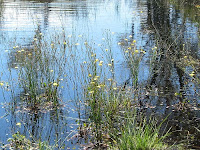 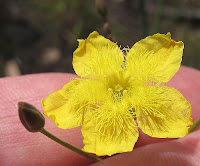 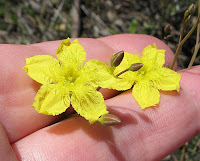 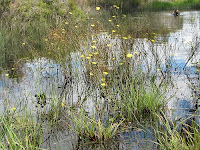 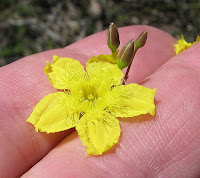 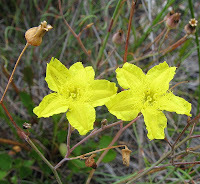 Ornduffia parnassifolia was previously known as Villarsia parnassifolia, but has now been incorporated into the newly described Ornduffia genus, but that is not all! Prior to this recent change, Villarsia was part of the Gentianaceae family (which still exists), but now transferred to Menyanthaceae, so in recent years it has undergone quite a bit of reclassification.

In 2009 Nicholas P. Tippery and Donald H. Les published a paper titled ‘A New Genus and New Combinations in Australian Villarsia (Menyanthaceae)’ where they placed the Australian Villarsia species into two genera Liparophyllum and Ornduffia and although Villarsia still exists, it no longer does so in Western Australia. Several features were used to separate the three genera, but the most obvious are the number of ovules (seeds when fertilised) held within each ovary. Villarsia has 1-4 ovules; Liparophyllum 5-10; Ornduffia 11.

Ornduffia parnassifolia is a very common herbaceous plant, with the flowering stem growing to 60 cm (2’) in height and can produce dozens of hairy 2 cm (3/4”) diameter sunny yellow flowers over a considerable period. It is mostly found on the outer edge of swampy areas, including heavy seepage zones and even along roadsides that have deep gutters where rainwater collects after rain. The seed is very likely spread by water birds particularly ducks, which visit most pondage areas along the south coast during winter/spring.

Soils are often peaty, but any sand/clay soil will do, providing it can retain water moisture. Ornduffia parnassifolia particularly likes it when surface water is receding (evaporating or slow draining), and the wet soil is starting to warm. It can flower at anytime of the year, providing there is sun and moisture and does not mind being partly inundated for several weeks. However, it is a marsh plant rather than a true aquatic, which are distinguished by being completely submerged in a more permanent aquatic environment. Ornduffia parnassifolia can survive quite well in better-drained soils, although flowering is then usually restricted to spring and early summer when seasonal conditions are warm and rainfall higher.