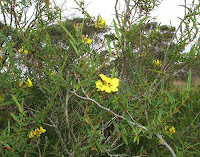 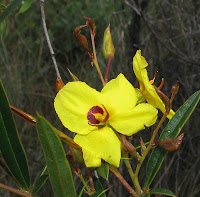 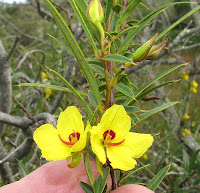 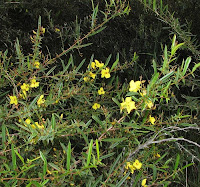 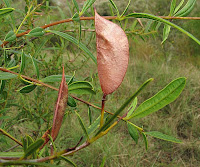 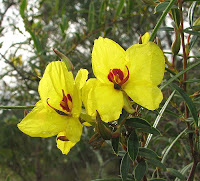 Due to recent research, the Labichea genus previously in the Caesalpiniaceae family, has now been moved to Fabaceae, basically due to its production of a pod (legume) when in fruit, although I am sure if you spoke to a relevant taxonomist you would get a more complex reason. So now Labichea is grouped with the Pea Flowers, Acacias and several others to make one of the largest Australian plant families. Labichea are related to Senna (Cassia) and likewise have a very open and mostly yellow flower.

There are two subspecies of Labichea lanceolata and both occur in the Esperance region Labichea lanceolata subsp. brevifolia is the one usually encountered, but a few subsp. lanceolata colonies can be located on granite outcrops a little inland around Esperance. However its main distribution is from Perth to Kalbarri 500 km (over 300 miles) on the west coast, but likewise odd colonies of subsp. brevifolia can also be found, although less common and more inland. Despite the subspecies appearing similar, they are easily separated by the number of small leaves at the base of the large leaf, with subsp. lanceolata having 0-2 and subsp. brevifolia 3-5 (occasionally 2) small leaves.

The shrubs are bushy from the ground up and can grow to three metres (10’) in height, although mostly around 2 metres and tend to grow in dense thickets. The flowers open between 2-3 cm (1”) diameter and are quite showy against the interestingly structured foliage, although not the best to pick due to the prickly leaves. In the Esperance region both species of Labichea lanceolata are closely associated with granite outcrops and prefer the deeper soils around them.

Flowering is quite prolonged due to it staggered flowering habit and can usually be relied upon to produce blooms from July to November, although a hot late spring will bring them to a sudden halt.

Posted by William Archer at 4:12 PM