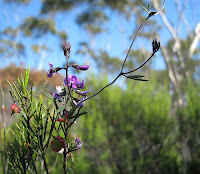 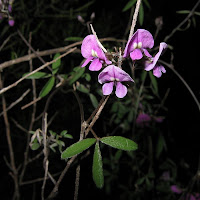 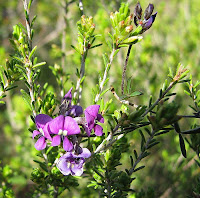 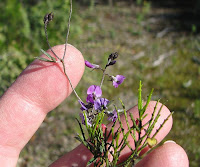 Glycine peratosa is a delicate little climber, seldom exceeding a metre (3’) in height. It grows in the shallow red sand/clay soil that surround low-lying granite outcrops to the NE of Esperance, but can also be found around Albany (550 km or 340 miles) to the west. Until recently, it was classified as Glycine clandestina, which occurs in the Eastern States of Qld, NSW, Victoria and Tasmania, but in 2001 the species was reviewed by B. E. Pfeil, M. D. Tindale and L. A. Craven, who not only separated the western population, but also split them into two additional species. The other G. rubiginosa is found on the Nullarbor and in South Australia, whilst Glycine peratosa is restricted to WA, although going on the WA Herbarium species distribution map, it is seldom collected or not particularly common.

The tiny violet/blue flowers are to 7 mm (1/4”) diameter and although grouped in small clusters are easily overlooked, but can be reasonably common on the outer edge of exposed low profile granite. As this environment is usually dry and harsh for most of the year, other vegetation is normally sparse, so the Glycine will climb on whatever plant is nearby, including clumps of broad-leaf sedge, or will trail along the ground seeking any elevated support. Glycine peratosa flowers during August and September when conditions are invariably moist from the limited but dominant winter rainfall.

Posted by William Archer at 6:17 PM