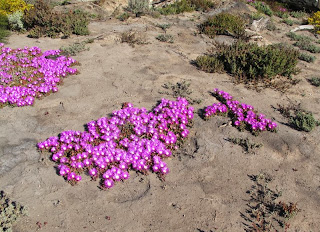 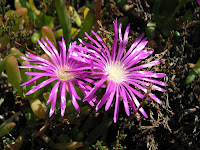 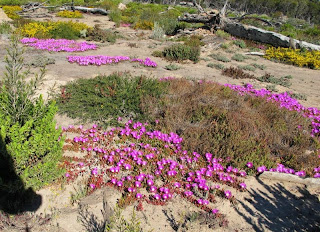 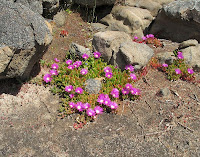 The Rounded Noon-flower belongs to the Aizoaceae family along with many other ‘Pigface’ plants like the similar flowered Carpobrotus genus. Disphyma crassifolium can be encountered in sandy hollows, on limestone, saltlakes and clay flood plains, particularly if saline, and commonly grows in association with other fleshy leaved salt tolerant species. Carpobrotus spp. generally grow in drier situations on deep calcareous and non-calcareous sand, elevated fine clay/sand mallee soils and rocky outcrops.

If not familiar with Disphyma and Carpobrotus plants, they can be a little confusing to identify, although easily separated by a few distinctive features; Disphyma has rounded leaves that root at the nodes, whereas Carpobrotus have angled ones and often do not root at the nodes, particularly the outermost ones. Also the flowers of the former are held above the fleshy foliage on long stems, whereas the latter are without stems (sessile) or nearly so and nestle between a couple of fleshy angular leaves. Lastly, the Disphyma fruits are dry, whilst Carpobrotus are succulent.

The Rounded Noon-flowers have blooms to 5 cm (2”) diameter and produce attractive floral displays that are helped by being produced for most of the year, although prolonged hot/dry conditions, or wet/cold ones will curtail this activity. Nevertheless, it is an exceptionally hardy species and despite environmental conditions will rarely succumb because of the reserve of moisture held in the leaves, although they will change color from green in good times, to an orange/red during long dry summers.

Posted by William Archer at 7:33 PM