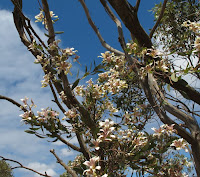 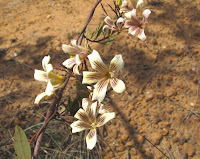 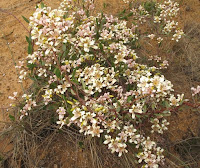 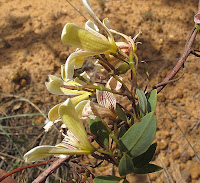 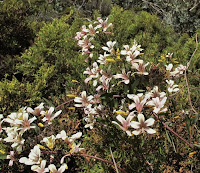 Previously known as Billardiera bicolor, Marianthus bicolor is a very widespread shrub or climber, growing in a variety of soils and habitats. It has been recorded from the Nullarbor in the east, and Kalbarri to the NW, a direct distance of around 1300 km or 810 miles, plus M. bicolor has been found to the north of Kalgoorlie, over 400 km or 250 miles from the south coast. However, as this plant commonly grows along roadsides and is highly adaptable, it is very likely many plants in these far flung areas, have been transported there as seeds by traffic or road construction vehicles.

Marianthus bicolor likes warm conditions and probably for that reason is excluded from the cooler SW corner of the State. Around Esperance it is particularly common to the NW of the town, growing on sand over gravel, or on gravel alone. It flowers at the hottest part of the year and provides prolific floral displays when few other plants are in bloom and even those that are, are nowhere as spectacular. Well named the Painted Marianthus, for the abundant colourful flowers of around 2.5 cm (1”) diameter, it will twine and climb to three metres (10’) on other vegetation, but if trees or tall shrubs are not available, it will develop into a spreading shrub of around a metre (3’) in height.

The WA Herbarium lists the flowering time of Marianthus bicolor from December to the following May, but this would depend heavily on local climatic conditions and as the plant is spread so widely, these would be considerable. Even around Esperance flowering times vary, but locally from January to April would cover the vast majority.