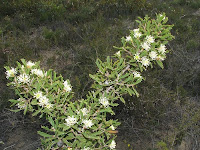 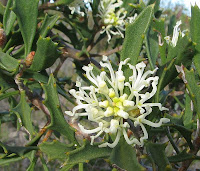 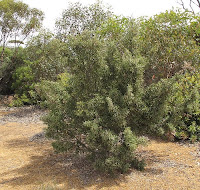 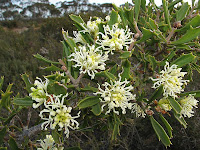 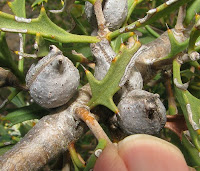 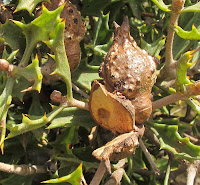 Upon first sight of this Hakea, you could be forgiven it you thought it was a robust form of Hakea varia, the Variable-leaved Hakea as it does bear a strong resemblance to it, as do several other hakeas termed the ‘Varia Group’. Fortunately most do not occur in the Esperance region and even this species is largely restricted to the NW of Esperance, although Robert Brown recorded as its first collector, when he and Matthew Flinders called into Lucky Bay 35 km (20 miles) east of Esperance on the first circumnavigation of Australia in 1801. However this area is not recorded on the WA Herbarium species distribution map, but they do for Albany, another port of call for Brown 420 km (260 miles) further west where Hakea ilicifolia is resonably common, so there may be doubt as to exactly where he made his collection.

Locally, 30-60 km (20-40 miles) from the coast and to the north of Stokes Inlet 65 km (40 miles) west of Esperance, I have found the Holly-leaf Hakea growing in sand over gravel, or directly on gravel, being part of the shrubby Proteaceae heath. Here it grows to around 2 metres (over 6’) in height and occurs in small scattered colonies, but obviously would have been more common before land was cleared for agriculture.

The leaves are thick and rigid with several very sharp spines that can cause serious injury unless handled very carefully. The chunky cream/white flowers open wide to reveal an interesting sharp S bend near the top of the perianth (petal-like) segments, giving the flower clusters a military guise. Pollination is very likely by insects (due to the sharp spiny leaves), as they would not be safe for birds or animals to alight or move over them. Flowering is recorded for August to October, which also agrees with my observations.