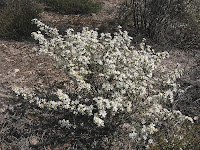 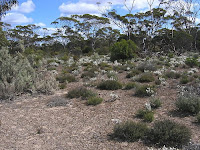 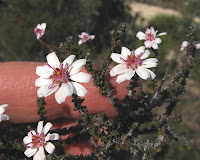 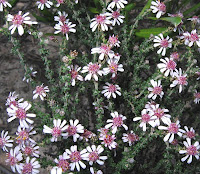 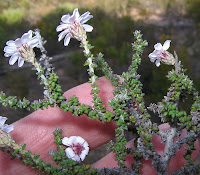 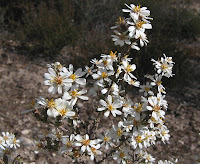 Olearia ramosissima belongs to the very large and diverse daisy family Asteraceae. The majority of daisy plants are herbaceous and usually annual. The genus Olearia is one of the relatively few that are shrubby perennials, and in Western Australia any shrubby plant with daisy like flowers, is highly likely to be an Olearia. Many Asteraceae are widespread, particularly those with long fluffy pappus attached to the seed (achene) that are picked up by the wind and blown far and wide, with successful distribution only limited by suitable habitat. Olearia ramosissima is one such plant and is restricted in WA to inland mallee regions, where widespread, even occurring on the Nullarbor.

The mallee region in WA is typified by a fine sand/clay soil over limestone, which Olearia ramosissima favours particularly when there are natural clearings. Above are two color forms of the same species, both taken on the same day and within a few kilometres of each other (130 km or 80 miles NE of Esperance). The white form was growing in a shallow dry soil over limestone, whilst the more colourful one was in a less dry, deeper soil, with a higher clay and nutrient content, but again over limestone. Apparently flowers come in white, blue, purple and pink, and vary in size from 1 to 1.5 cm (1/2”) diameter.

The Much-branched Daisy-bush can grow to over 1 metre (4’-5’), but is usually much shorter, particularly in harsh conditions. The leaves are ideally suited to the dry inland, being less than 2 mm in length and like most vegetative parts, are covered in fine woolly hairs, features highly effective in reducing moisture loss in a 30-40 cm (12”-14”) average annual rainfall zone.

Rainfall in the mallee region is notoriously fickle and often unreliable, consequently many local species are highly adaptable and opportunistic to take advantage of any heavy downpour. This considerably affects flowering, with recorded times for this species from July to the following April, which really reflects flowering opportunities over many years and not an annual blossoming situation, although with regular rainfall Olearia ramosissima can be quite long flowering.