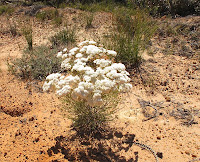 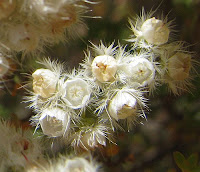 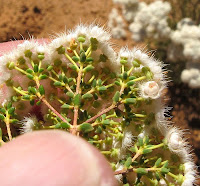 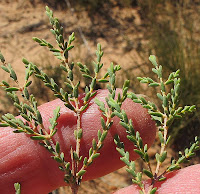 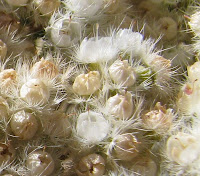 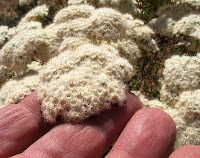 Verticordia eriocephala – Cauliflower Feather Flower
Verticordia eriocephala is more of an inland species and although widespread from Israelite Bay to Geraldton a distance of over 1000 km (620 miles), it is not common around Esperance. I know it from around Mt Burdett, about 50 km (30 miles) to the NE, but it is probably scattered in mallee heath further north, you just need to be in the right place at the right time.

This shrub is very similar to Verticordia brownii and was at one stage included under that name. It also has the constricted hypanthium (calyx), so the identity is very easily reduced to one of these species (they being the only local species with this feature). Secondly, V. eriocephala is always white or cream, whereas V. brownii is mostly pink, but can also be white. The described differences between them are (a) the style is shorter with this species, being 3.5-4 mm in length (V. brownii 5-6 mm) and (b) the style with V. eriocephala is without hairs or beard (glabrous), but bearded with V. brownii.

The Cauliflower Feather Flower can grow to around a metre (3’) in height in deep sand or sand overlying gravel, and commonly forms a dense cauliflower like head of white flowers, from which it gets the apt common name. Flowering is recorded for June (probably due to early rainfall, coupled with a late bout of warm weather), also from September to February, which is more the norm, although exact timing would be strongly based on local rainfall.