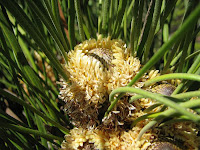 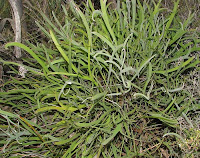 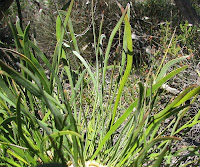 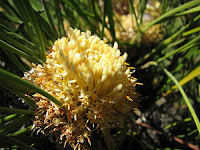 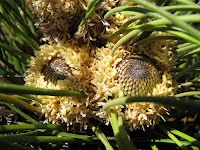 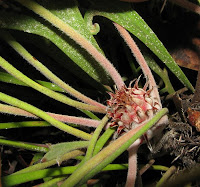 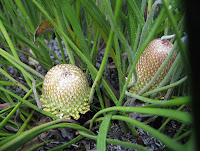 Isopogon alcicornis is an exotic looking plant with long leaves; many divided to resemble an Elkhorn Fern. Unfortunately it is an endangered species with a Priority Three Conservation Status, which means it is known from several locations (around Esperance to the Cape Arid region, 110 km or 70 miles to the east) and although not currently endangered, is in urgent need of further study. I know it from 40 km (25 miles) NE of Esperance, where odd plants grow in sand over gravel on a roadside reserve, in association with shrubby Proteaceae heath; adjacent farmland clearance would be the main reason for its local decline. A larger colony exists in the same district where saline water drains along a small flood plain into a saltlake, where surrounding and associated vegetation are Acacia, Melaleuca, Stipa (spear-grass), scattered salt tolerant shrubs and the occasional mallee eucalypt. Whilst not growing in the salt-laden zone, the Elkhorn Coneflower is distributed to the side of the drainage flow, growing in a fine sand/clay over clay.

The almost vertical lime green leaves, grow to 45 cm (1’6”) in length, and the yellow/gold flowers (5 cm or 2” diameter) nestle at their base, requiring them to be parted to obtain a clear view. The WA Herbarium record the flowers as being yellow, white or pink, which may represent local forms or just floral development stages. Also they have the flowering period from October to February, but these times would be related to variable climate conditions, as cooler/wetter conditions can considerably delay or extend flowering. The Elkhorn Coneflowers I observed began to bloom in September and finished in November, but this has been a hot/dry year.

Apparently, Isopogon alcicornis has a lignotuber, which means it will regrow rapidly from the tuberous rootsystem after bushfires. To me this indicates it would benefit from more regular fires to reduce competition from other plants that initially grow more slowly after seed germination, also the fresh regrowth free of old leaves, would permit pollinators easier access to flowers.