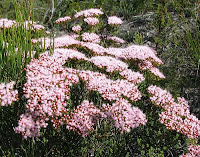 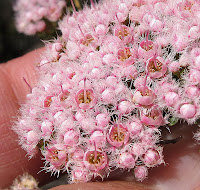 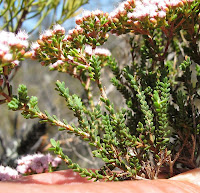 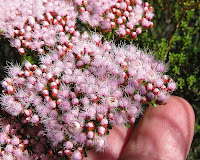 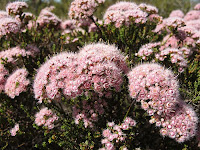 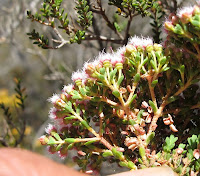 The famous Naturalist and Botanist, Robert Brown, who accompanied the equally famous Navigator and Cartographer, Matthew Flinders, first collected Verticordia brownii when they called into Lucky Bay (30 odd km, or 20 miles east of Esperance) in January 1802 on the first circumnavigation of Australia. It is a highly distinctive species, by having a constricted hypanthium (calyx or floral tube) and small neatly arranged oval leaves, which apart from a white flowering (mainly inland) species (Verticordia eriocephala) is locally unique.

Verticordia brownii can grow to a metre (3’) in height, although usually shorter and is commonly encountered on shallow sandy soils over gravel, or on gravel alone, plus is also found in sand/gravel soils on the lower slopes of granite outcrops. It ranges east of Esperance as far as Israelite Bay, to the north and NW of the town and in scattered localities SW of Esperance to the Stirling Range, an overall distance of around 500 km or 310 miles.

The small compact flowers are usually pink, but can also be white, which is confusing when separating it from Verticordia eriocephala, which prior to 1991 was lumped in Verticordia brownii. The most notable distinctions concern the style, with the length in V. brownii being 5-5 mm and V. eriocephala only 3.5-4 mm. Also the style is bearded at the top with V. brownii and without hairs (glabrous) with V. eriocephala. Small differences but apparently important.

The flowers are often arranged in near horizontal clusters to form impressive slabs of color and as they invariably grow in compact colonies, can be seen from some distance. Flowering is recorded from October to January, with November and December being the most reliable as local rainfall can influence flowering times.

Posted by William Archer at 7:45 PM