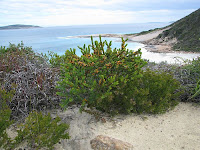 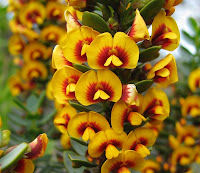 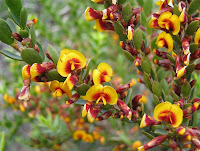 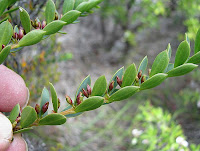 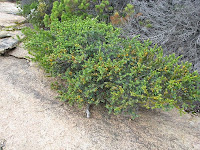 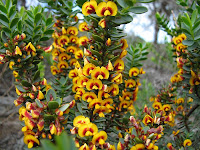 Eutaxia myrtifolia was previously known as Eutaxia obovata and is a highly adaptable widespread species, occurring from east of Esperance to the SW corner of Western Australia. In the Esperance region it is most commonly found on near coastal granite outcrops where annual rainfall is above 50 cm (1’6”), further west where rainfall is higher, it is also encountered in other habitats. Eutaxia myrtifolia can grow to over 2 metres (7’) in height, but locally is little more than half that size.

Around Esperance, soils on granite outcrops are usually sand, gravel or limestone over the granite and receive rainwater run-off from above, but as photographs show, Eutaxia myrtifolia will grow very close to the coast and is periodically subjected to salt-laden gale force winds during winter/spring. Nevertheless it is able to tolerate these harsh environmental conditions, by having thick, waxy, myrtle-shaped leaves that are neatly arranged along the branches. When the soils are deeper with good run-off, the foliage remains an attractive green, but if the plant is growing in dry conditions, it can become yellowish and might die unless there is greater rainfall. This indicates the limitations of this otherwise very tough shrub and why it does not occur in drier conditions further inland.

The flowers are bright and prolific providing Eutaxia myrtifolia with attractive displays, which locally are mainly produced during spring, however variable weather conditions can encourage or delay flowering as is evidenced by herbarium records of February, plus May to December.

Posted by William Archer at 7:23 PM