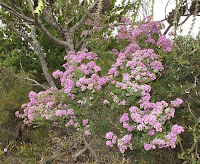 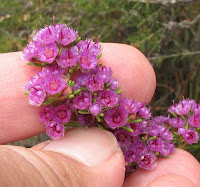 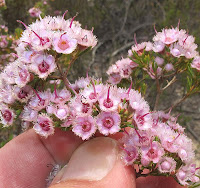 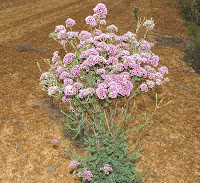 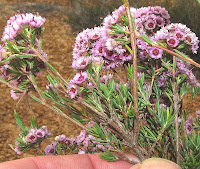 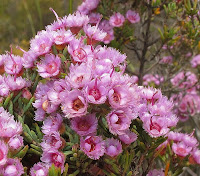 Verticordia sieberi var. sieberi is one of four varieties of Verticordia sieberi and the most common around Esperance, being found to the west, north and east of the town. One other (var lomata) also occurs in the district, but only around 100 km (60 miles) to the west near Munglinup, and differs from var. sieberi by having petals bordered with fine hair-like segments.

This species (Verticordia sieberi var. sieberi) is quite striking by having strongly coloured flowers of bright pinks to purple. The flowers although small are clustered together in numerous small bunches and are held well above (like a posy) the lower dense foliaged region. It prefers open heathland on well-drained sand or gravel soils and is often discovered in extensive colonies around the summit of small sandy hills or on elevated flat areas.

Verticordia sieberi var. sieberi is usually a well-shaped shrub to a metre (3’), although mostly shorter and is quite variable as to flowering time, having been recorded from January to June and again in September and October. However January to April would be the most regular, with unusual weather conditions simulating flower production at other times.