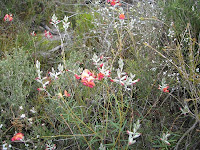 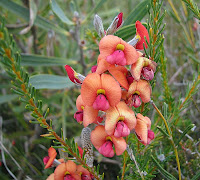 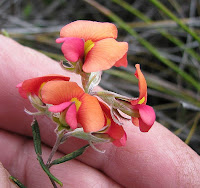 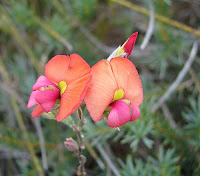 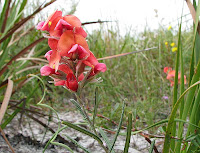 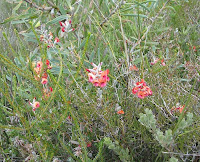 A common shrub around Esperance, particularly to the northwest, north and east of the town, but when not in flower is rarely noticed. It grows to around 60 cm (2’) in height with only a few weak scraggly upright stems that generally rest against other vegetation, particularly when in flower as they try to support clusters of large terminal flowers.

The Chorizema (Flame Pea) genus is renowned for it large colourful flowers and this species is no exception, by being impossible to miss glowing amongst and outshining neighbouring flowering shrubs. Each flower is around 1.5 cm (5/8”) diameter and when combined with several others are very eye-catching, as they are meant to be in order to attract pollinators. The linear leaves (to 5 cm or 2” in length) are widely spaced and grouped in pairs or singularly along the stems, appearing very much like Gastrolobium/Oxylobium species and was previously known as Oxylobium obtusifolium. The leaves are green on top and pale below, with distinctively raised veins, the margins are recurved and the top is often abruptly turned down to produce a bilobed appearance.

Chorizema obtusifolium is a heathland species and grows in deep sandy soil or shallow sand over gravel, with a preference for well-drained but seasonally moist conditions, common to lower slopes and flats. The main flowering period is from August to October, but can bloom later depending on local weather conditions.