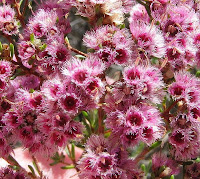 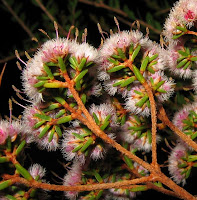 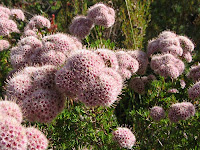 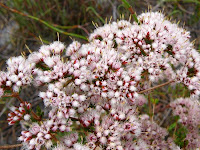 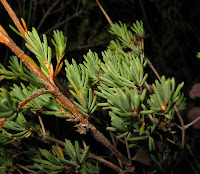 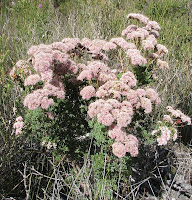 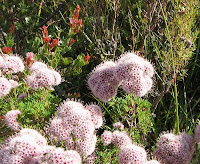 Superficially, Verticordia vicinella is easily confused with Verticordia minutiflora as they both flower at the same time (January to April) and resemble each other in flower/plant size and general appearance, but with closer inspection they are readily distinguishable. V. vicinella is commonly quite pink, or sometimes red, white and even yellow, whereas V. minutiflora is mostly grey to mauve. The hair-like sepals of V. vicinella have additional divisions, producing a distinctive feathered look, plus the petals are hairy on the outside and often finely divided (ciliate) at the top. Also, whereas V. minutiflora lacks staminodes, V. vicinella has small glandular-like ones between its stamens. For additional information on Verticordia minutiflora, please refer to that species in the Previous Posts section (right column).

Habitat preference is usually quite different, with Verticordia vicinella growing in heath and favouring low-lying sandy areas, although they can be found growing on the sandy soil immediately below granite outcrops and the granite associated Verticordia minutiflora zone. It will occasionally intermingle in this area, although the distinctive pink flowers give them away, as does the longer beard on the style. Another notable feature is the leaves of Verticordia vicinella are thicker and more openly arranged along the stem.

This species was only described in 1991 (Nuytsia Vol 7. Number 3) and later given a Priority Four Conservation Status, which classifies Verticordia vicinella as rare, but not endangered. However, it is quite common and widely distributed to the north and east of Esperance, plus also to the west where V. minutiflora does not occur. It mainly has pink/red flowers of various hues, and I presume the yellow form is much rarer as I have not personally encountered it. Records of summer flowering species are often patchy, as the drier/hotter conditions restrict all but a few species from producing flowers, consequently in more remote regions or further from the Perth herbarium, fewer botanists and interested people will be seen rambling over the countryside making botanical collections. 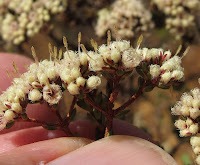 Update 14/02/10
Investigated the Helms Arboretum to the north of Esperance to check the Verticordia species. Found V. sieberi var. sieberi on a slight sandy rise, where locally common, but Verticordia vicinella was very common and widespread in most lower-lying areas. I also encountered the yellow form (that was quite widespread) intermingling with the more dominant pink varieties. However, the yellow color although distinctive when viewed closely, appear a greenish yellow, being diluted by the color of bracts, styles and stamens when viewed further away. The intensity was not what you might expect from a yellow flower and when surrounded by brighter colors, could easily be overlooked.