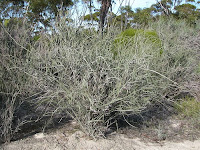 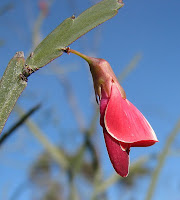 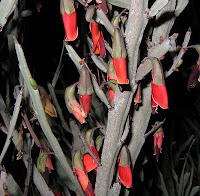 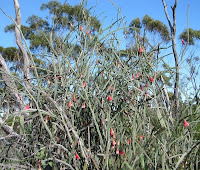 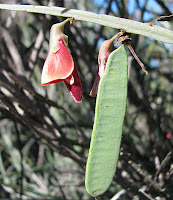 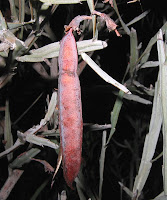 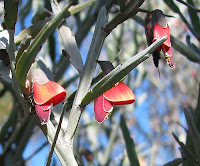 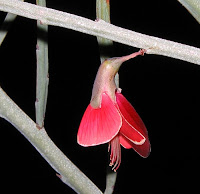 Bossiaea walkeri is a mallee shrub commonly growing between 1.5 and 3 metres (5-10’) in height and usually found inland except where the mallee vegetation comes down to the coast just north of Israelite Bay (190 km or 120 miles ENE of Esperance). The average annual rainfall in the mallee region is between 30-40 cm (12”-16”), which although winter dominant can be highly irregular, making many plants very opportunistic in order to take advantage of passing storms by quickly coming into flower after soaking rain. Nationally, the Cactus Pea is also found in similar mallee habitats (although often rare) in parts of SA, Victoria and NSW, although soils vary over its range.

Locally, Bossiaea walkeri is commonly found around low-lying granite outcrops, growing in the fine sand/clay loam over limestone and/or granite, here it favours the open area between the eucalypts and the open granite zone. These areas are very common to the NE of Esperance, where this plant is most plentiful. Interestingly, the leaves of the Cactus Pea are reduced to tiny scales and what look like waxy grey/green leaves, are actually flattened stems called cladodes that carry out a similar function to a leaf. In the hot and often prolonged dry mallee conditions, these stems are more hardy than leaves by reducing water loss and the need to replace stressed fallen leaves, plus they perform photosynthesis, respiration and transpiration.

The 2 cm (nearly 1”) long orange/red flowers are produced anytime between July and November and will often flower after seed has set to take advantage of additional rainfall following a dry period. Birds are the primary pollinators, although small mammals and insects probably also play a role. The seedpods are initially green, but mature to a bronze/brown that on a hot day will explode to propel the seed several metres.
Posted by William Archer at 5:55 PM