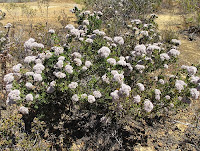 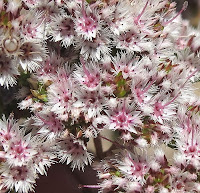 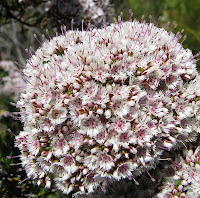 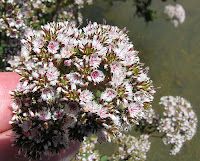 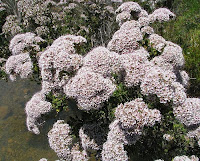 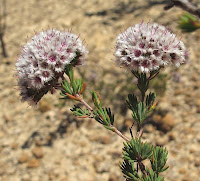 Verticordia minutiflora is a very common and often dominant shrub to the north and east of Esperance, although mostly growing around ½ metre (1’6”) in height, it can reach twice that size. It varies from a spindly upright plant to a moderately compact rounded one, with small tightly packed flowers in terminal dome shaped clusters. The flower centres are pink to red and the petals and simple sepals (unbranched and hair-like) are white, giving an overall pale mauve coloration.

The flowers need to be closely examined to be sure of distinguishing it from other similar looking species. The small white petals are not hairy, whereas most similar species are; the anthers are globular and face inwards; staminodes (false stamens) are minute or non-existent; sepals are around 2 mm in length. The hypanthium (calyx) is hairy and hidden by a couple of large bracts, it is also 5 ribbed, but these are only visible on dried specimens. The upward pointing leaves are linear and opposite, and closely nestle into each other.

The favoured habitat of Verticordia minutiflora and where they can occur in considerable numbers, is around the base of granite outcrops or rocky slopes with a gravel topsoil. Most Feather Flowers are long flowering and Verticordia minutiflora is no exception, as it blooms prolifically during the hottest part of the year from December to April and is known to flower at other times too depending on weather conditions. Pollination is by insects of which a common medium sized wasp with a distinct liking for this plant, is probably one.


Over the weekend I paid a visit to Saddleback Hill 50 km (30 miles) east of Esperance for the sole purpose of checking out Verticordia spp. As expected Verticordia minutiflora was very common on the shallow sand/gravel soils over granite, but was also very common in sandy hollows and small flood plains towards the coast, where the damp heath vegetation was low and dominated by sedge species. They were also found as scattered plants in a number of other habitats too, so although favouring granite outcrops, Verticordia minutiflora is by no means restricted to them.

An interesting Verticordia habitat preference was encountered over a 100 or so metres (110 yards), on a gentle incline from a hollow to the top of a sandy hillock with a height of around 10 metres. In the hollow and nearby were Verticordia minutiflora. A little above were Verticordia vicinella, and above them to the very summit was Verticordia sieberi var. sieberi. There was some intermingling, but very little and the species bands were clearly discernible.

Posted by William Archer at 7:37 PM