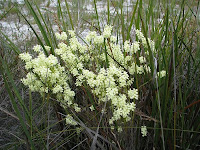 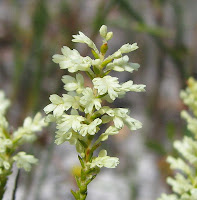 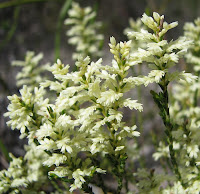 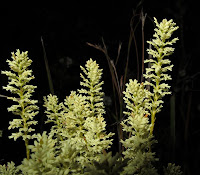 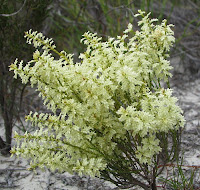 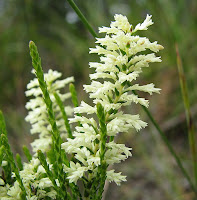 Oligarrhena micrantha – Ericaceae
Oligarrhena micrantha is the only species in the Oligarrhena genus and is another small heath species from the SE portion of Western Australia. It has a strong preference for non-calcareous sandy soils, which tend to be reasonably close to the coast, plus the slightly higher and more reliable rainfall in this region compared to further inland, may also suit this plant. This attractive small shrub that seldom exceeds ½ metre (1’6”) in height, is sprinkled through the sandy heathlands from Israelite Bay to west of Albany, a distance of around 600 km (370 miles).

The main features that distinguish this Oligarrhena genus are the corolla lobes (petals), which number only 4, and 2 stamens, whereas other Australian heaths usually have 5 of each. The small cream flowers are arranged in compact spikes that are so numerous as to blanket the plant when in bloom. and curve down to give a soft arching appearance.

Like most small heaths it needs a reasonable open environment to florish, so is less likely to be found in heavily overgrown areas, but where the heathland habitat is regularly burnt and/or walking tracks slashed, it can be quite common, although never dominant. Flowers are recorded from September to December, although locally October/November would be the most prolific period.