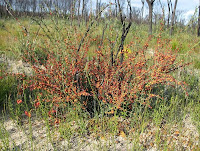 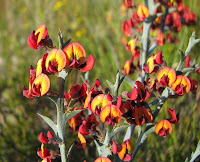 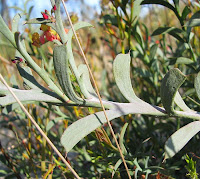 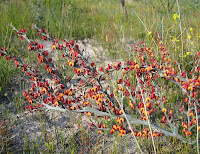 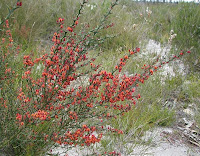 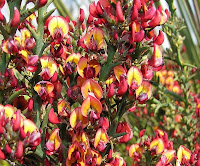 There are 2 subspecies of Daviesia incrassata in the Esperance region, the other D. incrassata subsp. reversifolia has already been posted (see right-hand column) and is characterised by backward facing leaves. The new growth of Daviesia incrassata subsp incrassata can be curved and broad, or straight, narrow and angled upwards when older. Sometimes they are glaucous (mealy blue) when young, but mostly a non-mealy light blue/green as they mature. The growth habit of this subspecies is more upright, growing to over a metre (4’) in height and stiffly arching outwards.

Daviesia incrassata subsp incrassata is the most widespread of the subspecies, occurring to the east of Esperance from the Cape Arid region, to the west coast near Jurien Bay (170 km or 105 miles south of Geraldton) and a direct distance of 900 km (560 miles). Locally, preferred habitats are non-calcareous sandy loams over gravel, often in the vicinity of granite and/or low-lying areas. Although widespread it is not commonly encountered but found in scattered compact colonies, where difficult to overlook when in bloom, due to slabs of color from a mass of flowers.

Flowering over its extensive geographical range is recorded from June to November, but locally July to October would be more the norm, with August/September producing the best floral displays.

Posted by William Archer at 4:17 PM