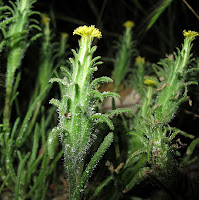 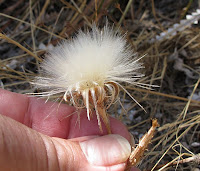 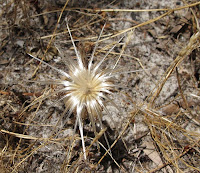 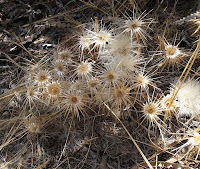 Podotheca angustifolia belongs to one of the largest plant families, most commonly known as Asteraceae but still known as Compositae, although less so these days. The non-scientific name for this large worldwide plant group is ‘Daisies’ and includes tiny annuals to shrubs and even small trees. The large and often picturesque flowers are actually a collection of smaller ones called florets. One being a small tubular floret and the other petal-like, both are complete flowers and will produce seed (achenes) when fertilised.

There are three combinations of these small florets and depending on their composition will determine their relationship within the Asteraceae family.
First are the typical daisies with small tubular florets in the centre and petal-like ones around the outside.
Second and like Podotheca angustifolia above, all the small florets are tubular.
Thirdly and like the common dandelion, all florets are petal-like with no tubular ones.

To return to Podotheca angustifolia, this is a widespread annual daisy, commonly called a Sticky Longhead referring to the elongated outer green sticky bracts. The yellow flowers/florets although long, are very narrow and tubular to just project above the surrounding bracts. These develop into the achenes (seed) with the pappus above to carry them away on the wind, hopefully to suitable fertile ground.

Most of the annual daisy plants do very well after bushfire or soil disturbance when most taller vegetation is killed-off leaving open spaces for them to temporally colonise, at least until the larger perennial shrubs grow to dominate and smother the small annual species. However, their seed will remain viable in the soil until conditions are again suitable for germination. I should add that the achenes of some daisies have only a limited lifespan, so grasslands, herbfields and rocky outcrops are particularly good habitats for annuals generally, as larger perennial plants due to habitat restrictions are naturally curtailed.

Podotheca angustifolia can often be found in natural clearings or after fire in well-drained (ideally sandy) environments and encountered across the southern half of Australia from WA to SA, Victoria and SW NSW. It is even recorded from the north of Tasmania, but is now thought to be extinct there.

Flowering can be from August to December, although locally September to November would be their main period. The flowers may appear a little odd (but not unattractive), however their interest does not end there, because the green herbaceous outer bracts dry to a shiny gold and later silver color, which are not only quite appealing, but would no doubt attract the eye of ‘craft’ people.