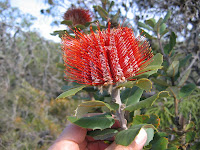 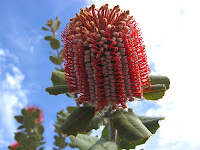 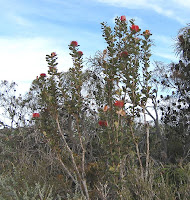 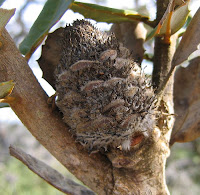 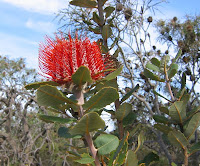 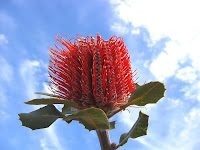 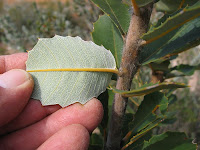 Robert Brown who accompanied Matthew Flinders on the first circumnavigation of Australia in 1801 made the first scientific collection of Banksia coccinea. He took it from Albany, which along with the Stirling Range is the heartland of this species. It is unfortunately very rare in the Esperance region and I have only seen it around Young River 70 km (44 miles) west of Esperance (its most easterly distribution), however there are several large tracks of bushland in the Young River district, including the Stokes National Park, so may be more common than I have observed.

The Scarlet Banksia is a very spectacular species with its blood red terminal flowers (10 cm or 4" diameter) and chunky foliage. For this reason it has always been a popular cut-flower and is exported to several countries. Collection from wild stocks is not encouraged these days as the fatal dieback disease Phytophthora cinnamomi of which Banksia coccinea is highly susceptible, can be spread by collectors travelling between colonies.

Apparently Banksia coccinea can grow to a height of 8 metres (26’), although I have only seen them to less than half that height. It is not a bushy shrub, but usually an upright plant with a few lateral branches, although sometimes growing close to each other to form a small thicket. The Scarlet Banksia grows in a shrubby heath/woodland environment, preferring sandy rises and flats, often around ephemeral swamps, drainage zones or flood plains.

Another attractive feature of this shrub or small tree is its long flowering period, officially recorded from May to January making it an important food plant for the Honey Possum, Honeyeating Birds and no doubt many others.