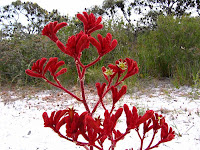 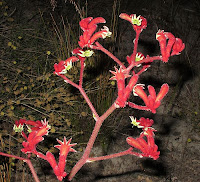 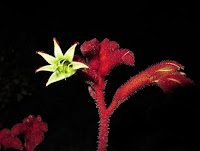 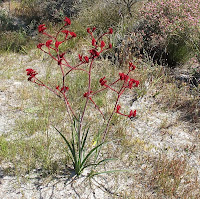 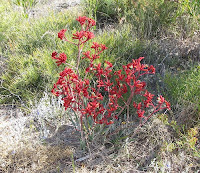 Anigozanthos belongs to the Haemodoraceae family that includes the genera Conostylis with their attractive tubular flowers and the strange black flowered Haemodorum, also known as Bloodroots. Anigozanthos rufus is a striking heathland species and the only Kangaroo Paw in the Esperance region, although it can be chanced upon from Israelite Bay (180 km or 110 miles east of Esperance) to Albany (400 km or 250 miles SW of Esperance). It grows prolifically on non-calcareous sandy soil in low-lying (well-drained) zones, often over deep seepage draining from one ephemeral swamp to another, to less moist habitats atop large sandy hills. It is found from the coast to inland mallee areas, plus occasionally on well-drained gravel soils between.

Kangaroo Paws are tussock forming, producing new shoots from an underground rhizome, which means they will readily grow back and not killed by bushfire, or if the vegetative portions above ground are damaged. They are however killed by poor drainage, or over-crowding by larger plants, indicating the need for periodic fires and weed control and if provided, will bloom annually for many years.

The flowers are formed on long stems (to a metre or 3’ overall) and were once collected for the overseas Cut-flower market, although these days they are grown commercially for that purpose and wildflower populations are largely left to do their own thing. The flowers are long lasting and vary in color from scarlet to maroon, and whose only purpose now is to attract honeyeating birds in order to pollinate them.

Flowering is recorded from August to January, but locally the best displays are usually around October and November.


Update November 2011
I have seen many Red Kangaroo Paws (Anigozanthos rufus), but until now have not seen any yellow ones. There were several entirely yellow plants, growing with the typical red form in a deep non-calcareous sandy soil, around 2-3 years after a bushfire had passed through. There were no in between color forms. The habitat was Banksia speciosa heath to the east of Esperance. 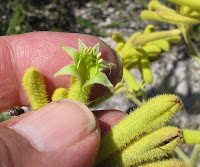 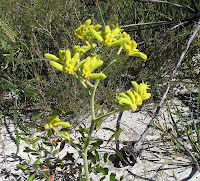 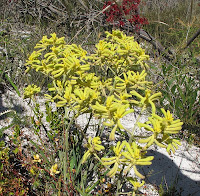 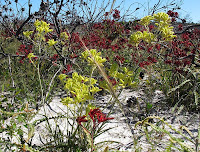 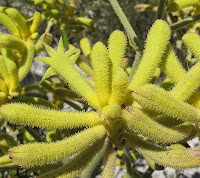